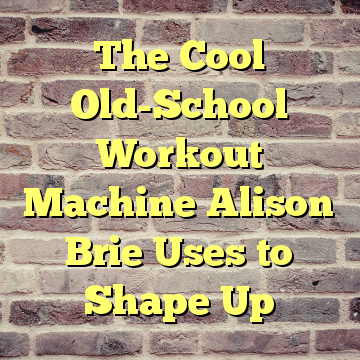 If you look up the definition of “badass” in the dictionary, we’re pretty sure you’ll find a picture of Alison Brie, the star of GLOW, Netflix’s hit comedy series about a women’s pro-wrestling circuit in the 1980s. Not only because Brie gets raw in the ring on the show (think body slams, flips, and headlocks), but because the 34-year-old’s daily workout moves are kind of killer. Seriously. Scroll through her Instagram feed and you’ll find her knocking out weighted pull-ups, pulling sleds loaded with three times her body weight, and muscling through split squats while casually toting 80 pounds. NBD. That’s why we often look to Brie for fitspo—and the actress never disappoints.

In fact, she recently shared a video on her Stories in which she’s using Rogue Monster Lever Arms, which is an updated version of Jammer Arms—an old-school strength and conditioning machine commonly used in professional and collegiate football training programs. Brie’s caption: “fun new toy today.”

What makes it so great? “This machine grounds you while developing both lower- and upper-body explosiveness and strength,” explains health coach and performance specialist Faheem Mujahid, owner of HumanWorks, a private training studio in in Miami.  Plus, the arms move independently of each other, which is a great way to work on muscle imbalances. You can perform both pushing and pulling movements; and it works multiple joints and muscles at a time. Check out the demo video below to see all the Rogue Monster Lever Arms can do:

RELATED:  This Cardio Machine Works Your Entire Body (and Will Do Wonders for Your Butt)

So what was Brie doing with that hunk of metal in her video? We’d guess it was some variation of a squat to overhead press. (FYI: Brie notes in the video that this was her first time using this piece of equipment, which we take to mean that her form, or the move, may not have been at 100% yet.)

No access to Jammer Arms? Look to a cable machine instead, which offers less stabilization support, but allows a similar range of motion depending on the exercise. If you are a skilled lifter, you can also try this movement with a barbell, which would require more use of stabilization, notes Mujahid. “Barbell weight is static throughout each point within the range of motion as compared to the lever and cables, where the level of resistance varies depending on where the individual is within the range of motion,” he says. (You could also try a variation with with dumbbells. Check out how to do that move here.)

To get more workout tips, sign up for the HEALTH newsletter

Wondering how this might help Brie nail her wrestling moves as her alter ego “Zoya the Destroyer”?  “As a wrestler, it is important to develop a strong center of gravity, as well as an efficient productivity force/output between both the lower and upper extremities due to the fact that most of the required muscles and/or positions used for the sport demand a high level of production from a transfer of force from a lower position to a higher position,” explains Mujahid. In other words, our money is on Brie claiming the championship belt when season two of Glow premieres sometimes in 2018.