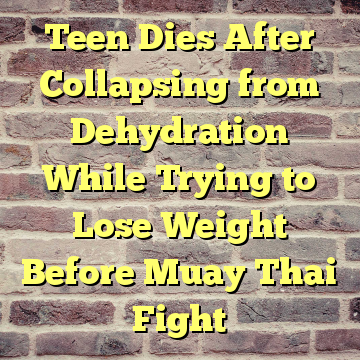 An 18-year-old Australian woman died while cutting weight for an amateur Muay Thai fight, according to multiple reports.

According to 9NEWS, just one day before the fight was scheduled to take place, Jessica Lindsay collapsed from severe dehydration while she was running. Sporting News reported that she died four days later in a Perth hospital.

Leading up to her collapse, Lindsay had been cutting weight so she would be eligible to compete in the amateur fight, which had a weigh-in at 64 kilograms (which is approximately 141 lbs), the 9NEWS report said.

While the Combat Sports Commission has said that weight-cutting is not covered in its legislation, they are “constantly reviewing processes and guidelines around contest health and safety,” according to Sporting News.

9NEWS reported Lindsay’s death will be investigated by the coroner.

A GoFundMe page set up by a friend of the teen — which is raising money to help pay for funereal costs — also claimed that there were similarities between Lindsay’s death and the death of Jordan Coe. According to The Telegraph, Coe was a professional Muay Thai fighter who died in March of a suspected heat stroke while cutting weight for a fight.

The fundraising page also stated that it hopes that the teen’s “legacy will make a change and stop this from happening to anyone else.”