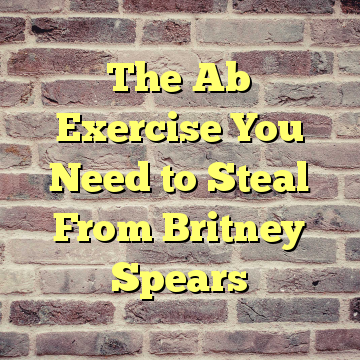 Leave it to Britney Spears to show us a killer core move we’ve never seen before. Yesterday the sculpted pop star posted a video on Instagram of her a.m. workout in Japan, where she’s kicking off her world tour.

At the start of the clip, Spears does a few reps of camel drop-backs, a variation on the classic Camel yoga pose, in which you start in a kneeling position and arch your upper body back, lifting your chest to the ceiling, and reach for your heels.

Instead of staying there for several deep breaths (as we’re used to doing in this restorative pose), Spears lifts her upper body to return to a kneeling position, and raises her arms overhead; then repeats the entire movement.

“Great workout this morning!” Spears wrote in the caption for the video, which racked up more than 1 million views in 10 hours. “Woke up in Japan feeling free and grateful. Better work bitches!”

There’s no question Spears’ hard work will pay off. Camel, also called Ustrasana, is a pose that comes with multiple benefits (including better sex!).

“I’m assuming she’s doing it to stretch out her abdominals,” says Kristin McGee, Health’s contributing yoga and wellness editor. “But it’s also great for strengthening the core and the lower back, while also opening up the hip flexors, quad muscles, and psoas.” (The psoas is a muscle that connects your trunk to your legs.)

To get more ab workouts and flat belly tips delivered to your inbox, sign up for the Healthy Living newsletter

Adding drop-backs to the typically stationary pose makes it more challenging: “When you move back and forth more rapidly, it works the core and hip flexors even more,” says McGee.

Just be careful if you suffer from low-back injuries or high blood pressure, she cautions. People with hypertension may not want to dip their heads back.

Our favorite part about the pop star’s spin on Camel? Between each drop-back, we can sing, “Oops, I did it again.”