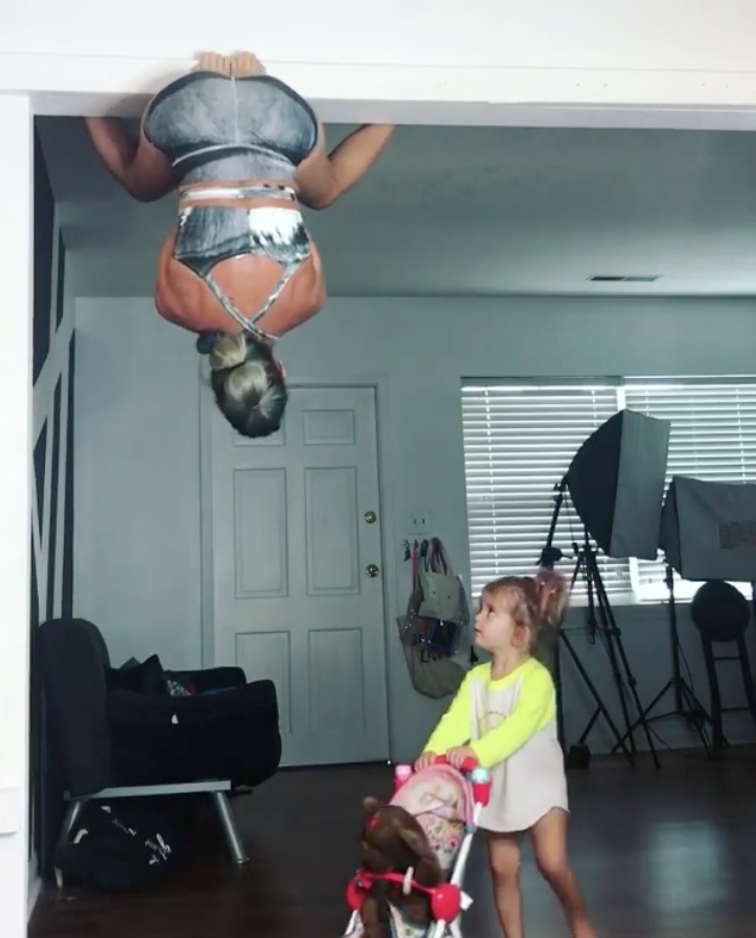 With over 132,000 Instagram followers, Charity Grace LeBlanc is used to getting noticed for her extreme workouts. But one recent post had the internet upside down!

The 28-year-old mother of two showed off her high-climbing skills in a video filmed at her Clearwater, Florida residence — crawling on the ceiling as her 2-year-old daughter Felicity LeBlanc watched from below.

The clip was picked up by the popular “Fit Moms of IG” account, where Charity was given the nickname “Spider-Mom.”

But for those who know Charity, her stunts aren’t anything new. “I always was an active child — climbing trees, playing outside, and taking dance classes,” she tells PEOPLE.

That doesn’t mean she was climbing on walls right away as a mom. After the birth of her first child, now 6-year-old son Oakley LeBlanc, Charity realized she needed to start easing back into fitness — so she started with yoga. Once she had that down, Charity started incorporating aerial circus arts and ninja training into her workouts.

It was rock-climbing that inspired Charity’s “Spider-Mom” workouts. “I just began working on my grip strength after falling in love with a few rock climbing sessions at a local rock climbing gym,” she explains. “I would go outside of my house and hang on the edge of the roof and do some pull ups or practice on Monkey bars when I took my kids to the playground.”

Eventually her husband of 7-years, Andre LeBlanc, gave Charity a Christmas surprise of building a hanging ledge and little gym inside the house. “My family loves it!” Charity gushes. “I caught my daughter swinging on one of the workouts rings we have in our house, and she look at me and said ‘Wook mommy! I strong like youuu!’ ”

Her social media followers have also encouraged her. “[They] always give me so much encouragement and inspire me to push myself harder and put together more creative workouts,” she says.

Ultimately, Charity hopes those who watch her online get inspired to pursue fitness in a way that excites them.

“I have always encouraged people to pursue fitness as something you enjoy doing or activity that excites you,” she says. “I’ve never been able to be one of those people who spend long hours inside a traditional gym. I find I push myself and have more fun when I’m doing an activity such rock climbing or obstacle course racing or evening performing aerial circus arts. Fitness and fun are so entwined for me, I don’t know which comes first sometimes.

“Allowing your children to watch and partake in your fitness will allow them to set up a healthy lifestyle, mentally and physically, for themselves,” Charity says. “My daughter and son are involved in a lot of my fitness activities, so I think it’s good for other parents to see that it’s possible to pursue your fitness goals and also have a fun time with your kids.”