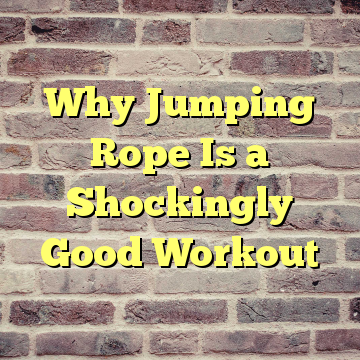 A jump rope feels decidedly old-school: something you played with as a kid but that most adults, except for boxers, leave behind.

That’s a shame, because jumping rope offers a combination of benefits to bone, balance and muscles that most types of exercise can’t match.

“If you’ve done it lately, you know how much it can get your heart pumping,” says Tim Church, a professor at Louisiana State University’s Pennington Biomedical Research Center. “But one of the nice things about it is the intensity can really be as high as you want it to be.”

While slow-paced rope jumping is a great warm-up exercise, rapid jumping or “double-unders”—where the rope passes under your feet twice before you land—will leave you panting after just a minute or two.

MORE: The TIME Guide To Exercise

The whole-body synchronization required to successfully jump rope is another major selling point. “Boxers do it because the precise timing it requires between the feet and hands helps connect the upper and lower body with the brain,” Church explains.

Like a group of musicians unaccustomed to playing with one another, your brain and major muscle groups can struggle to stay in sync—especially as you age. Jumping rope helps them perform in concert, which can lower your risk for slips and awkward falls.

“When I teach kids who are struggling with coordination or complex movements, I have them jump rope,” Church says. One study of young soccer players found that compared to kids who only practiced their soccer drills, those who incorporated a jump-rope routine better improved their balance and motor coordination.

MORE: Jumping Up and Down Is Ridiculously Good Exercise

Surprisingly, jumping rope is also a good way to activate and sculpt your upper body. “It can seem like all the rope spinning is coming from the wrists and hands, but there’s actually an amazing amount of work required from your upper arms and shoulders and back to control and stabilize the rope,” says Michele Olson, an adjunct professor of sports science at Huntingdon College. “Especially compared to running or other forms of cardio, it’s moreso a total-body workout.”

Those benefits extend to your bones. “Anything that has some impact to it or that places a load on your bones will increase their density,” Olson says. “Jumping rope certainly has that aspect to it.” A study in the Journal of Applied Physiology found that young women who jumped as high as they could just 10 times, three times a week for six months, increased bone mineral density in their legs and the lower half of their spines.

“The other nice thing is the impact goes through the ball of the foot instead of the heel, which is what causes so many problems in runners,” Olson says.

Remember the barefoot running craze? A lot of its benefits boil down to the way it forces a shorter stride and fore- or mid-foot takeoffs and landings, as opposed to the heel-jarring longer strides made possible by padded running shoes. Like barefoot running, jumping rope is mostly done on your toes and the balls of your feet, so it may be less likely to cause the knee and hip injuries associated with some other forms of impact cardio.

Be warned. Though it may look easy, it can be a tough workout. “Depending on how intensely you’re doing it, it can be on the vigorous end of the exercise spectrum,” Olson says. “If you’re 50 pounds overweight and haven’t been exercising, this isn’t how I’d start,” Church adds.

But if you’re in decent shape and not carrying a lot of extra weight, Church recommends adding a short jump rope portion—maybe five minutes—to your usual workout routine. “You could theoretically do 30 minutes of it a few times a week, and have that be your cardio, but it’s probably better to work it into your regimen,” he says. “A little goes a long way.”