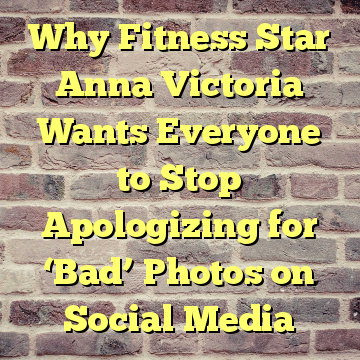 Have you ever scrolled through photos from a night out with friends, only to worry about whether you look good enough in any of them to make the cut for Instagram? You’re certainly not alone. Not even superstar fitness blogger Anna Victoria is immune to feeling insecure about what she looks like in a photo before deciding to post (or delete) it.

But when she caught herself feeling vulnerable before sharing a pic from a family vacation the other day, she took it as an opportunity to spread an important message about self-love.

The social media star and trainer behind the Fit Body Guides posted a photo of herself playing in the waves in Hawaii with her niece on a family vacation. In the caption, she wrote, “Of course when I saw this photo I thought, ‘soaked hair, slouched over, makeup all over,’ I could go on. But how silly is that?”

“I’m not saying you have to love a ‘bad’ photo of yourself,” she continued. “But don’t hide away pictures of beautiful memories and beautiful moments with friends and family just because you don’t like how you look.”

Victoria admits that she felt “nervous” about posting the shot originally, “because it’s hard to be vulnerable and share your less-than-perfect moments,” she tells Health. “But I wanted to use that photo as an example that what we look like is not more important than living life and making memories and documenting them.”

It’s not only so-called ‘bad’ pictures that Victoria wants women to stop worrying about or over-analyzing; it’s also the pictures in which someone is totally happy with how they look. Often times, even when some people share a photo they actually love, they may still crack a joke or apologize for a flaw, she explains, as opposed to writing a positive message about why they love the shot or the story behind it.

“There’s an element of, especially on social media, potentially coming across as just wanting attention if we proudly share a moment in which we feel beautiful. And to combat that, women will often point out a flaw that likely no one else would have noticed otherwise,” Victoria explains. “I think society has conditioned women to avoid using language that would make them appear too into themselves, and we play into this by either refusing compliments or being self-deprecating.”

So next time you go to post something on social media but feel a twinge of insecurity, just “own it,” Victoria urges. “Share it without diminishing your beauty.”