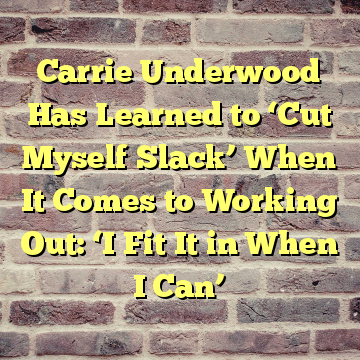 Before having her son 2-year-old son Isaiah, Carrie Underwood would work out six or seven days a week, but she doesn’t put pressure on herself to maintain such an intense workout schedule anymore.

“It just happens if and when it happens,” Underwood, 34, told PEOPLE of her new approach to working out at the CALIA by Carrie Underwood Summer Kick-Off event in Malibu on Friday. “I’ve gotten a lot better at doing what I can when I can, but also cutting myself a little slack. You have to!”

That means squeezing in a workout when it’s doable.

“Now it’s like, ‘Okay, I have 20 minutes. What can I do in 20 minutes?’” she says. “I can go run for a little while, I can go do some tabata rounds, I can do something. Sometimes I’m like, my workout today is going be running around after my kid. If we’re going to go to the park, why not run there and push him in the stroller? Then I get a good cardio session to and from, and then he gets to play, so everybody wins.”

If she does have a little more free time, she’ll do a full tabata workout.

“I ‘play cards’ a lot — I assign different exercises to each suit, and I sit down at breakfast and plan out what each suit’s going to be,” she says.

Her other go-to activities are running and group exercise classes, like Barry’s Bootcamp.

“I love just putting headphones in and going for a run,” says Underwood. “I feel so good when I get home, especially when it’s hot. I’m one of those weirdos that likes to run when it’s super hot outside! Or classes. I find myself competing with other people in the room. I’m like, ‘Oh she’s good, I want to be like her!’ I try to ‘beat’ someone in the class. They have no idea we’re competing!”

The singer says finding time for herself is possible thanks to family support.

“It helps having a supportive husband and a great unit around me,” she says. “You have to sit down and talk to those around you because I feel like I’m a better mom, a better wife, a better friend when I feel good about myself. It’s endorphins and all that stuff that’s being released, too. No bad things can come out of taking care of yourself!”

And having her own fashion line of workout gear is extra motivation to hit the gym.

“I used to go to the gym in ratty old sweats, but if you already feel good going into your workout, it just kind of gives you that little extra lift,” she says.

Underwood says her drive to work out comes from herself, and not from external pressures to look a certain way.

“It’s all about realizing why you do it,” she says. “I want to be a great mom and I want to be around for him for as long as I possibly can. I want to feel good about myself, I want to set that example for my child and make that a priority, because he’s watching. He’s a busy guy, so I need to keep my energy levels up to be able to play with him and chase him around. So it’s for me and my family and for feeling good about myself. Sometimes you have to remind yourself, but it helps to just say, ‘It’s not for everybody else, it’s for me.’ “