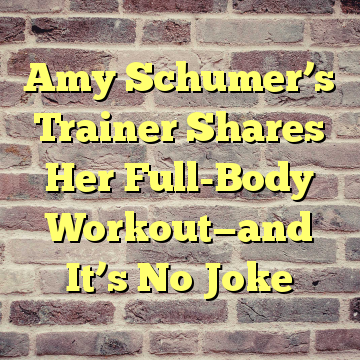 We may know Amy Schumer as the funny girl who can crack a joke on command, but there is one thing that the star of the new movie Snatched takes seriously: her workouts.

The proof in this video, which shows Schumer sweating it out under the watchful eye of her trainer Harley Pasternak. Pasternak recently posted this clip of the comedienne performing a two-minute cardio burst on a Helix. (More on that later.)

“First of all, Amy’s naturally an athlete,” notes Pasternak who says Schumer has an effortless humor that lights up the room  and makes everyone around her smile. “She played sports at a high-level through high school and college, and was an aerobics instructor. So she’s very coordinated, and easy to push in the gym.”

So how exactly does Pasternak help keep Schumer looking her best? The simple seven, he says—that is, a circuit of seven strength moves that target the entire body. “The exercises sometimes vary, but I usually pick one exercise for each of the seven major body parts,” explains Pasternak who offered up the skater lunge, dumbbell stiff-leg deadlift, dumbbell curl press, single arm dumbbell row, lying dumbbell triceps extension with hip thrust, spider plank and Superman. “Sometimes I have her just pick one of these exercises and do anywhere from three to five sets with 15 to 30 reps. Other times I’ll have her do all seven exercises, doing one to three sets of 15 to 20 reps.”

RELATED: 18 Exercises to Tone Your Legs and Butt

Pasternak also has Schumer hit the Helix, a gym machine that works the body on a lateral plane. “Most of what we do is forward and back, so to find something that works us more side to side I think is really helpful for those under-worked muscles like the abductors and obliques, while still hitting the glutes and quads,” he says. “I mainly use the Helix as a cardio burst when doing a circuit, but it can easily be used for more prolonged bouts of cardio.” Don’t have access to a Helix? No worries. Pasternak, says you can put two towels underneath your feet and slide side to side on a hardwood floor to mimic the movement of the machine.

For overall wellness, though, Pasternak reminds us that walking is essential. “This is by far the most important thing that I can ever tell someone to do,” he says. “Get a Fitbit, set a daily step goal of at least 10,000, and keep moving.”

Stand with feet shoulder-width apart and knees slightly bent. Hinge forward at waist as you raise left foot. Push off right foot and explode toward the left, landing on left foot with knees slightly bent; touch right toes to the ground behind left foot. Push off left foot and explode back toward the right, landing on right foot with left toes touching behind it. Continue, alternating back and forth. (Click here to see a photo.)

Stand with feet hip-width apart and a dumbbell in each hand, palms face thighs. Brace core, and keeping weight in heels, hinge at hips and lower torso as you slide dumbbells down the front of thighs. Weights should only go down as far as hamstrings will allow without your back rounding. Slowly rise to standing, and then repeat.

Stand holding a dumbbell in each hand, palms facing out, with  hands shoulder-width apart and arms hanging in front of you. Curl the weight toward shoulders and then press weights up directly over shoulders until arms are straight. Lower back to start and then repeat.

Start from a lunge position with left leg forward and left elbow resting on knee. (Or, place left knee and left palm on a bench.) Grab a dumbbell with your right hand. Row the dumbbell up along your ribs, squeezing the right shoulder blade. Lower back to start and then repeat. When you switch sides, switch legs so that the right is forward.

Lie facedown with arms and legs fully extended and shoulder-width apart. Simultaneously lift legs and arms at least 6 inches off the floor; hold for 5 seconds, lower and then repeat.

Get into the “up” part of a pushup. Lift right foot, bending right knee and brining it toward the outside of right elbow. Return to start, switch legs and repeat on the left side. (Click here to see a photo.)