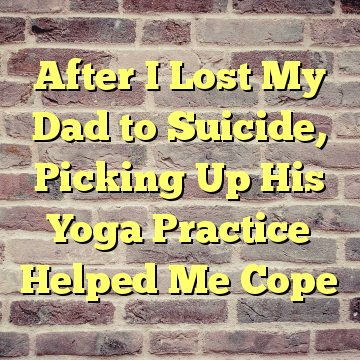 In September 2002, Kara Edwards was in the car on her way home from a weekend in the country with friends when her phone started blowing up with messages. “We reached an area with cell service, and I started getting bombarded with texts from my three brothers and other family members,” she recalls. Frightened, she called one of her brothers: “He told me that our father had committed suicide.”

“It felt like my world had spun off its axis,” recalls Kara, now 37. “My father was one of my best friends. I’d been a daddy’s girl from the time I was little, and even though he lived in another state, I talked to him all the time. We had just spoken before I left for the weekend, and he seemed fine. I was so stunned and distraught I couldn’t think straight. I had to ask my friend to pull the car over to the side of the road so I could get out and walk around. It felt like life would never be normal again.”

For a long time, it wasn’t. “I went back to work a couple of weeks later, but it was the least productive time of my life,” she says. “I couldn’t concentrate or get anything done because I was so paralyzed by shock and grief.”

She wasn’t functioning well socially, either. Kara, a single mom, and her three-year-old daughter shared a townhouse with a friend who loved to have people over, and Kara began to feel resentful and judgmental of their ability to laugh and have fun.

“They didn’t understand what I was going through, and I thought they were shallow, so I became more and more introverted, staying in my room and writing songs and crying,” she recalls. “The more alone I was, the more depressed I became. I was in a downward spiral and, without my dad, I didn’t know where to turn for help.”

RELATED: I Was in an Abusive Relationship—But Yoga Gave Me the Strength to Leave

Six months after her father’s death, she was sorting through a box of his belongings and found a Kundalini yoga video. “I didn’t do yoga—and I didn’t know he did,” she says. “But I’d been listening to lots of his music, and I thought this might be another way to connect with him, so I tried it.”

Kara remembers, “I cried off and on the whole practice—not in sadness, but in release. I’d been struggling with the feeling that I wasn’t good enough because I wasn’t enough to make my dad want to live. But something about the movement was incredibly comforting.”

She started doing the tape every other day, and over time, the practice helped her absorb the reality of what had happened—and find ways to cope.

“Yoga helped me discern between real limitations and false limitations. For instance, Kundalini is a cardio challenge, but I was able to push myself to do more of it than I thought I could—which made me realize that I could push through my pain off the mat and get to a better place emotionally as well,” she says.

Most importantly, yoga helped Kara feel connected to her father—and continues to even now. “When I’m practicing, I feel like he’s here. I may not be able to see him or hug him or laugh with him, but his spirit is with me, and that’s incredibly comforting,” she says.

“Yoga was my dad’s legacy. My practice keeps me grounded, focused and confident in my own resilience. It allowed me to move on, to get married and have another child. I believe my dad left that tape for me, because he wanted me to learn to manage my feelings in a way he was never able to.”