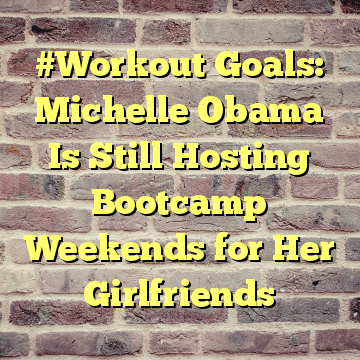 The former first lady took to Instagram on Monday to share photos from a recent “bootcamp weekend” that she hosted for her “crew” at a friend’s house outside Washington, D.C.

“When I was at the White House, I often hosted bootcamp weekends for my close girlfriends. It didn’t matter that we were all at varying fitness levels. Our bootcamp weekends were a reminder that if we want to keep taking care of others, we need to take care of ourselves first,” she wrote in the caption. “And even though I’m no longer at the White House, I’ve continued this tradition and wanted to share some photos.”

“My girlfriends have been there for me through all kinds of life transitions over the years – including a pretty big one recently! – and we’ve done our best to stay healthy together,” Obama continued in the caption. “Whether it’s a bootcamp or a walk around the neighborhood, I hope you and your crew can find some time this summer to be healthy together.”

This isn’t the first time Obama has shared details on her personal fitness routine.

In 2015 she released a video of her workout regimen as part of the #GimmeFive challenge celebrating the fifth anniversary of her “Let’s Move” campaign to raise awareness about healthy living in the United States.

In the video, Obama lifts weights, jump-ropes and boxes — challenging viewers at home to do the same.