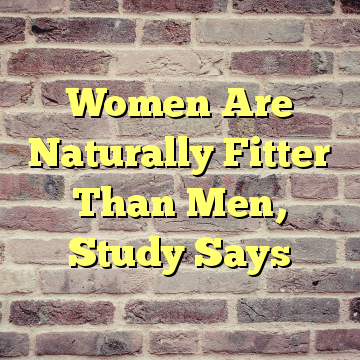 Conventional wisdom holds that men have the natural advantage when it comes to physical ability. But in one key measure of fitness, women actually come out on top, finds a small new study published in the journal Applied Physiology, Nutrition and Metabolism.

Researchers from the University of Waterloo in Canada directed nine women and nine men—all 18-30 year olds who were of similar body mass index—to walk on the treadmill. After a short warm-up, they were asked to walk at gradually increasing speeds and inclines, going until they had reached 80% of their maximum heart rate. Each person wore a face mask to measure how much oxygen they used and how much carbon dioxide they produced.

“The specific measurement we did in this study was to look at how quickly oxygen uptake increases when you go from a rest to exercise transition,” says study author Richard Hughson, kinesiology professor at the University of Waterloo. “If people are unfit, they adapt more slowly to exercise, they perceive it as being a greater load and therefore they back off and they become progressively less fit.”

In that way, Hughson says, oxygen uptake is a great indicator of overall physical fitness—and one in which women excel. The researchers found that women adjusted to exercise after about 30 seconds, while men took 42 seconds. That translates to a roughly 30% faster rate of oxygen processing, and a clear advantage when it comes to physical efficiency. The researchers also found that the female athletes were better at transporting oxygen to tissues throughout their bodies, and that their tissues, in turn, were better at using the extra oxygen.

So while men may be inherently a little stronger and faster than women, they can’t claim to be universally fitter, Hughson says.

“Fitness can be defined by that maximal aerobic power, or it can be defined by some other indicators,” he says. “If you monitor how quickly a person adapts to an exercise level, it really is an indication of fitness and health.”

Next up, says lead author Thomas Beltrame, the research team plans to expand the research to include elite athletes, not just recreational exercisers. “In the future,” Beltrame wrote in an email, “studies are needed to determine if our results from recreationally active men and women, who were matched for fitness, will also apply to the fittest women compared to the fittest men.”