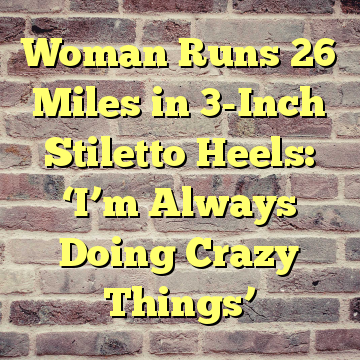 Because running a marathon isn’t difficult enough, one woman decided to do it in a pair of 3-inch stiletto heels — and set a Guinness World Record in the process.

Irene Sewell decided to take on the challenge after reading about a woman who attempted (but didn’t complete) the same feat in London.

“As a former professional ballroom dancer turned runner and triathlete, I thought my background would pair well to help me obtain the record,” Sewell, 27, tells PEOPLE.

She contacted Guinness, who approved her application for a record-setting run, and set her sights on toeing the line at the 7 Bridges Marathon in Chattanooga, Tennessee, on Oct. 15. But her workouts didn’t entirely go as planned.

“I had a year to train — which I needed both physically and mentally,” Sewell says. “I began running all my runs in heels but quickly learned that was an easy way to wear my feet out and toed the line of possibly getting injured. After having some forefoot pain, I saw a podiatrist who recommended that I run most of my training runs in my normal running shoes and throw in the heels every once and a while.”

Along with training, picking out the right pair of shoes ended up being “one of the hardest parts of my journey,” Sewell says.

“Guinness required a heel height of 2.75 inches and a base of 1.5 cm so that was challenging. I also couldn’t decide for the longest time between open and closed to shoes because they both have pros and cons. Closed toe shoes would protect my feet but I was worried after multiple miles my feet would swell and not fit in them,” she explains. “I actually tried out about 6 different pairs of heels before finding the perfect pair.”

And while her friends were on board, her mother had doubts.

“My friends know I’m always doing crazy things so they were all super excited to experience my journey me,” Sewell says. “My family on the other hand had a completely different reaction. My mom, as supportive and cautious as can be, asked me multiple times leading up to the race why I couldn’t just try a 5k or half marathon!”

But the marathon went off without any shoe-related hitches, and Sewell easily glided to a finish two minutes ahead of the time limit of seven hours and 30 minutes.

“When I finished everyone was SO supportive and excited for me!” she says. “I had a huge group of friends come out to the race and cheer me one, which was amazing!”

And Sewell found a miracle product in the process, which she recommends for anyone who wants to follow in her shoes.

“My biggest secret weapon was wearing moleskin on the bottom of my feet,” she says. “That stuff was incredible and I’m definitely going to use it when I go out dancing or to clubs on the weekends!”