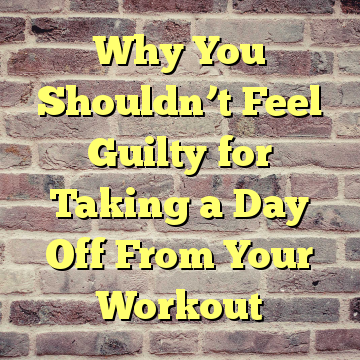 Feeling bad about skipping a day? Taking rest days from your workout may actually be healthier for your bones and body than a nonstop fitness streak, according to a small new study.

The preliminary research, presented at the American Physiological Society’s annual meeting, found that women who were Olympic rowers had more signs of inflammation and lower levels of bone-building protein in their blood during their most intense weeks of training, compared to recovery weeks that included days off.

These protein fluctuations may be a warning that training without adequate recovery could lead to injury or bone loss, study authors say.

RELATED: The Best Workout to Do When You're Really Sore

In general, exercise is good for bone health. Bone mineral density, an indicator of bone strength, typically increases with regular physical activity, especially the weight-bearing type. But experts have often wondered if too much exercise could have the opposite effect, especially for female athletes. That can be a difficult thing to measure, says Nigel Kurgan, a graduate student in the Centre for Bone and Muscle Health at Brock University in Canada, because elite athletes may also follow strict dietary patterns that could also negatively affect bone health.

To help account for this, Kurgan decided to study 15 female heavyweight rowers training for the 2016 Olympic games. Rowers have a high incidence of stress fractures and are at increased risk for bone loss—but because these women weren’t competing in the sport’s lightweight category, restrictive eating and low-calorie diets were less likely to play a role.

At several points during the nine-month study, Kurgan took blood samples from the rowers to measure levels of two proteins in their body: osteoprotegerin (OPG), which stops bone mineral loss, and sclerostin (SOST), which inhibits new bone formation. The rowers’ training ranged from 12 to 21 hours a week.

Levels of OPG decreased over the course of the study, indicating that the athletes were indeed at risk for bone loss. The highest levels of bone-growth-inhibiting SOST corresponded with the weeks with the highest training volumes, and vice versa. Inflammation in the body also increased during the most intense training periods.

The researchers also tested the rowers’ bone mineral density at the beginning and the end of the study, and found no change. But they say that the consequences of intense training may only become evident after longer periods of time.

“We are learning that regardless of whether you eat well or not, the systemic inflammation of intense training—unless you bring it down from time to time—creates an issue for bone cells and all kinds of tissue,” says co-author Panagiota Klentrou, professor and associate dean in the department of kinesiology at Brock University. “When you’re at peak training volume, you also have to incorporate time for the body to recover.”

This theory likely applies to all levels of athletes, not just Olympic hopefuls, Kurgan says.

Recovery is important for other reasons, too: Muscles need time to repair themselves from the stress of hard training, and the body needs rest and adequate fueling to maintain high levels of functioning. A 2016 study in Frontiers in Physiology found that two days in a row of intense, CrossFit-style workouts lowered levels of anti-inflammatory cytokines in the body, suggesting a potential drop in immunity.

With further research, it’s possible that scientists could develop a blood test to let athletes know when they’re overdoing it, says Klentrou. “There may be markers that coaches can monitor to see if they have to adjust their training volume,” she says.

Amateur athletes don’t need to take such elaborate approaches, she says. “If they monitor the symptoms of their body and watch for signs of exhaustion and poor recovery from hard workouts, I think they’ll be pretty safe.”