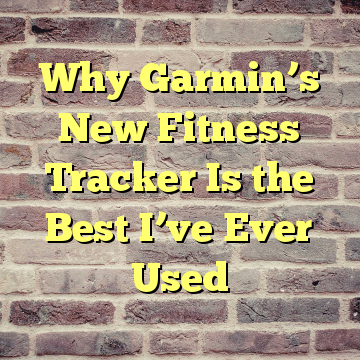 On the market for a new fitness tracker? On April 12, Garmin released its newest wearable, the Vivosmart 3 ($140; amazon.com), the update to its Vivosmart HR+ fitness tracker that was released almost a year ago.

The Vivosmart 3 comes with a few new features that make it useful not only for cardio fanatics, but also your run-of-the-mill gymgoer. As a self-proclaimed cardio hater (sorry, but you’ll never catch me "just going for a jog"), I decided to put the Vivosmart 3’s features to the test. Here’s what I thought.

Fitbit diehards may have a run for their money when they see how slim (and Fitbit-like) Garmin’s newest model looks. According to Garmin, this wearable is “a master of subtlety.” The touchscreen is smaller than the tracker's previous versions, so it doesn’t look like a clunky brick on your arm. Plus, the display isn’t perpetually lit up—the screen only brightens when you tap or lift your wrist slightly to check the time. Other features include the traditional watch-buckle band and two color options: black or a grayish-purple.

Garmin has always offered step and mileage counting in its fitness trackers, but now you can also use the device to long your strength-training workouts. A rep-counting feature can be turned on to track your reps and sets and record them in the Garmin Connect app.

The Vivosmart 3 can also track your VO2 max—the maximum amount of oxygen your body can use at any given moment—and translate that data into your “fitness age.” For challenge-loving exercisers, it’s an easy way to notice changes in your athletic ability over time.

RELATED: The Best Ab Exercises You're Not Doing

The coolest new feature, in my opinion, is the device’s ability to track your stress levels. The Vivosmart 3 uses your heart rate variability to estimate how stressed you are on a four-level scale. If it turns out you’re feeling the pressure, the watch can help you calm down with a breathing exercise. Set the duration (1 to 5 minutes) and hit start; the watch then commands you to breathe in and out in counts of four.

Features like sleep tracking, a heart rate monitor, a 5-day battery life, and a waterproof shell have been passed down to this latest installment.

This watch provides all the features you'd expect—smartphone notifications, heart rate and step tracking, and other fitness tracking features—but it’s the new abilities that really make the Vivosmart stand out. I love to lift (and hate cardio), and now, there's finally a watch that can help me achieve my goals in the gym. I'm also a fan of the stress-level indicator. The streamlined design makes the watch much more attractive than its predecessors, and is something I'm not embarrassed to wear all day.

At $10 less than Fitbit’s newest wearable, the vivosmart 3 could be a top fitness-tracking contender. I give it an A+ in my cardio-loathing book.