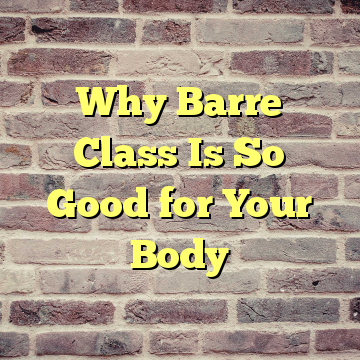 In ballet training, the barre is the horizontal handrail dancers grip while perfecting their technique. Barre-style workouts take those classic ballet warm-up exercises and reimagine them for a much wider audience.

While it may seem like a recent phenomenon, barre strength and flexibility training have been in vogue since the times of Louis XVI, says Ginny Wilmerding, a research professor at the University of New Mexico. The modern-day version is primarily a leg-and-butt workout; from your ankles and calves up through your knees, hips and glutes, barre movements are all about improving range of motion, strength and flexibility in your lower half by forcing one of your legs to perform graceful and precise movements while the other supports and stabilizes you, she says.

The sales pitch for all of that excruciating precision is that if you want a dancer’s body, you should train like a dancer. “I mean, who doesn’t want to look like a prima ballerina?” says Michele Olson, a professor of exercise physiology at Auburn University, Montgomery. “You’re talking about nice, lean muscle tone and perfect posture.”

But just as going to football practice won’t make you look like a linebacker, barre training is more likely to help you achieve a ballerina’s muscle endurance and balance than her body shape.

Those are valuable assets that do not come with every workout. Unlike muscle strength, endurance determines your muscle’s ability to work for long periods of time. (Strength may allow you to lift a weight, but muscle endurance dictates how many times you can lift it.) Barre is also effective at targeting the “support and steady” muscles that run close to your bones and tie into your core and spine—the ones most of us neglect when we spend a lot of time sitting or engaged in forward and backward activities like running, says Olson. “Real 360-degree balance involves a lot of those side-to-side muscles a lot of us don’t use much, and so they become weak,” she says.

Barre is also low impact and has a built-in handhold, making it a relatively safe form of exercise. Especially for older people at risk for falls, barre may be a good way to improve stability and avoid accidents.

But the workout is not without risks, especially for the back and knees. One example: “Ballerinas are taught to tuck the pelvis so that the low back that normally curves inward loses its curve and looks straight,” Olson says. While dancers do that for their art, tucking the pelvis can lead to back pain and injuries for the average exerciser.

Most barre classes have abandoned that sort of strict pelvis-tucking, but Olson says some classes still include extreme plié knee bends that can increase a person’s risk for knee injury. Especially if you decide to go for a run right after your barre class, the “excessive” amount of pressure that some barre moves place on your knees could lead to sprains or strains.

RELATED: These Super-Fit Moms Are an Endless Source of Inspo

“There are some things dancers do that others have no need for,” says Wilmerding, who advises to take the training slowly and to focus on form, rather than trying to get an intense muscle or cardio workout from the practice. Like tai chi, “you’re working on stability and flexibility and strength, but you have this higher goal of control and aesthetics.”

Another point to keep in mind is that even though barre class brings a good core workout, you may be torching fewer calories than you think. One of the few published studies that has looked at barre’s cardiovascular and metabolic demands found that the activity—at least in its traditional form—doesn’t burn many calories and more closely resembles walking than running in terms of its intensity.

“Like any form of exercise, I think you need some variety,” Olson says. “Do it three to five days a week if you want to get the most out of it, but do something different with a cardiovascular component on the other days.”