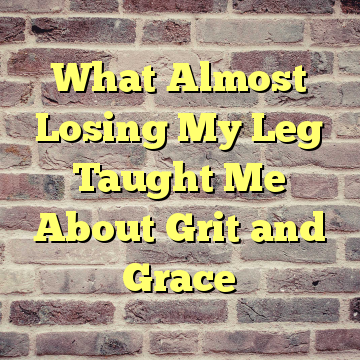 Still riding the high that came with nailing a pre-marathon tempo run just an hour earlier, I was completely thrown by a sudden onset fever, torrential sweating, nausea, and searing pain in my left ankle. Considering I was attending back-to-school night for my two teenage daughters, Adair and Taylor, when the symptoms hit, not embarrassing them by vomiting or fainting in one of their classrooms was my primary concern. And, once I was home—and after a full-on internet searching session—I decided it was “simply” a stress fracture.

When I finally visited an orthopedic surgeon friend a couple days later, he was justifiably irritated with my flippant diagnosis and delayed treatment, but also confused. An X-ray and MRI showed no injuries, so he took fluid from my engorged ankle and cultured it over the weekend.

It was Labor Day weekend 2016, meaning I had plenty of time to writhe in pain—I birthed two babies and this was worse—and be frustrated that I didn’t have the energy to crew for friends in The Grand Traverse, an ultra trail race from Crested Butte to Aspen, Colorado. I was actually supposed to be running with them. Nothing made sense.

Tuesday morning dawned with a text from my doctor saying, “You need to come in today.” Denial was at an all-time high, so I tried to delay the visit using deadlines, my husband being out of town, and my kids as excuses. Yet my doctor’s insistence was raising a red flag (as if the pain, need for crutches, and listlessness weren’t enough), so I drove myself the hour to his office and hobbled into an exam room around noon. Things got serious quickly: My diagnosis was a staph infection in the ankle joint, and it was spreading up my leg towards my knee.

At this point, the doctor was fairly certain he could save my leg (WTF!) if he went in and flushed out the infection, and so I began massive doses of antibiotics and was admitted to the hospital that day for observation.

Yet I balked. My husband wouldn’t be back until Thursday. The kids were home alone and I had the car. I didn’t like taking medicine. He cut through my feverish haze by explaining that if I postponed treatment until Thursday, I would definitely lose my leg. And waiting until Friday would be the final nail in my coffin, literally. So at 3 pm, I entered surgery.

RELATED: I Lost My Leg in the Boston Marathon Bombing—and Then Trained to Run the Race

When I awoke, I immediately looked toward my foot. It was still there! But little did I know, surviving treatment and surgery was the easy part. Living again would be the real test.

Still not grasping the severity of my condition, I asked the good (I’m still here after all) but decidedly humorless infectious disease specialist how all the meds I was taking would affect my training for the New York City Marathon. I felt myself shrinking into the bed and falling into a black hole of hopelessness as she explained not only should I never expect to run or race again, it was time to find a new hobby.

As the infection began to subside, instead of relief, a smoldering anger took hold of me. Many people emerge from such events with a newfound joy and gratitude for life. I on the other hand was pissed. I threw myself into physical therapy, yoga, Pilates, weight training, relearning how to walk and swimming. Movement was my medicine and soul balm, and I was all in for two, three, sometimes upwards of five hours a day.

Feeling inspired, I decided my therapy would be training for and completing a 70.3 half Ironman triathlon (1.2 mile swim, 56-mile bike ride, and 13.1 mile run). I started biking, and by January 2017 even began alternating jogging with walking. Minutes turned into miles, but it wasn’t the same. The infection left me with limited mobility in my ankle, resulting in a rather awkward stride that caused new niggles in my knees and hips.

RELATED: I Lost a Leg After My Helicopter Crashed in Afghanistan. Sports Helped Me Get My Life Back

After finishing the Bolder Boulder 10K that May, my body began to rebel. Besides the aches, pains, and permanently creaky ankle, my endurance was now nonexistent. All the years of running and racing no longer mattered, and, as far as my body was concerned, “we” were starting over. I suffered repeated bouts of bronchitis by taxing my asthmatic lungs harder than they were ready to be pushed, caught colds on the regular and had a stomach ulcer kick in for good measure. Sleep was what I needed, yet I was still ‘sleeping’ with the light on from PTSD due to the entire experience.

By finding moderation and doing my best to let go of expectations, I was able to finish Ironman 70.3 Boulder 11 months after being told I would never run again. And my anger was finally replaced with wave after wave of tearful relief and appreciation as I collapsed into Adair’s arms at the finish line.

But my story doesn’t end with a finisher’s medal and a smile. Before I got sick, I was certain my fastest marathon was yet to come. Now, whether or not I’ll ever run another is uncertain, and, for the first time in years, I have no running-related goals.

Anger only got me so far, and it was exhausting. Grace is my new goal: grace in accepting where I am, in being kind to myself, in finding humor in the limp that comes when I’ve done “too much,” in deciding what’s next, and being joyful for the accomplishments of my more able-bodied friends. It’s hard, harder than any finish line I’ve crossed, because wanting more is my natural inclination. The ultimate lesson, I suppose, comes in wanting what you have. And as I look down at my two feet, I have 9.5 gnarly toenails from running thousands of miles, and I’m grateful.