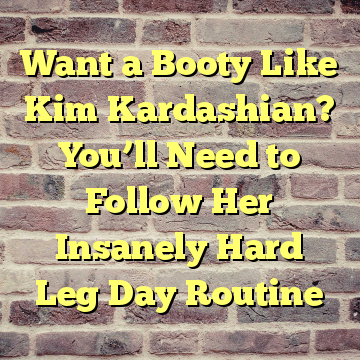 Kim Kardashian West has one of the most well-known (and most photographed) bottoms in Hollywood. And according to the 36-year-old reality star’s Snapchats on Saturday, it takes a lot of work to maintain that legendary booty!

In a series of videos, the mother of two — who is expecting a third child, a girl, via a surrogate — walked her followers through a few of the exercises she does to stay fit.

Next, the Keeping Up with the Kardashians star launched into a cycle of weighted power sled pulls, Romanian deadlifts, and seated leg presses.

She ended her workout with glute kickbacks on a weighted leg curl machine.

Fitness was never something Kardashian West was passionate until some unflattering paparazzi photos of her on vacation in Mexico inspired the star to find a whole new way to get in shape.

“I saw these awful photos of myself when I was on a trip in Mexico and people were photoshopping them and sharpening them,” Kardashian West explained on The View in June.

The aggressive photo editing and media scrutiny came at a particularly bad time for the multifaceted mogul, who is mom to 21-month-old son Saint and daughter North, who turned 4 in June.

“I mean I definitely was not in my best shape. I hadn’t worked out in 12 weeks,” she said. “I had two surgeries on my uterus … I was already not feeling like myself, and then when people were sharpening them and making them look way worse and then those were going around, I was like, ‘Okay. I’m gonna get it together.’ ”

To help, Kardashian West linked up with a bodybuilder she met on social media to formulate a better routine. Describing the new regimen, Kardashian West said, “I definitely think that you have to do the work. I get up every morning between 5:30 and 6; workout before my kids get up. I’ve been working out for an hour and a half [each day].”

Along with her dedicated gym time, Kardashian West also “totally changed [her] diet” after realizing a key mistake she was making.

“I was eating less thinking like, ‘Okay. I’m just not gonna eat this,’ ” she explained of her old dieting habits. “But I was eating absolutely no carbs or trying to and that’s really hard for me.”

Her new workout buddy, however, helped her solve this problem. “She’s really helped me with my meal plan to definitely add healthy carbs, vegetables. I was just not eating properly.”

Kardashian West isn’t the only member of the KarJenner clan spilling her workout secrets.

Sister Khloé Kardashian reveled the secrets of her revenge booty in a Khlo-Fit video on her app on Sept. 6 — turning the lens over to her trainer, Don Brooks and pilates instructor Shannon Nadj for the demo.

Brooks walked app subscribers through his Matrix Method, which includes four quarters, with two exercises a quarter, each done for three sets.

The first exercise in the first quarter is a basic lunge, repeated 20 times on each side. The series is then repeated on a Bosu ball, this time with only 10 reps on each side.

In the second set of the first quarter, Nadj jumps laterally into the squat position, repeating the move with 20 reps on each side. Again, the exercise is repeated on the Bosu ball.

Moving on to the second quarter, Nadj does dynamic squats for 20 reps, before repeating the exercise on the Bosu ball for an additional 20 reps.

The second set of the second quarter is jump switch lunges. Nadj jumps three times and lands in a lunge, repeating 20 times on each side. This move is also repeated on the Bosu ball for 20 reps.

Brooks’ complete workout with Kardashian is expected in a later clip.