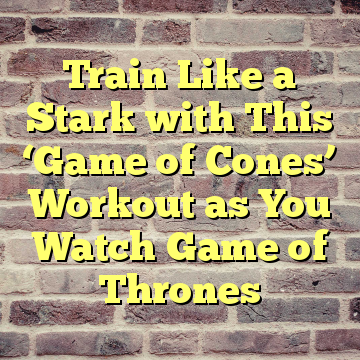 You may not encounter any dragons or need to fight off sword-wielding attackers in your daily life, but you can still train for it with this Game of Thrones-themed workout.

The next time you settle in for an hour (or ten hours if you’re binging, no judgment) of feuding families, fit in a little leg burn with this cone-based circuit workout that trainer Luis Badillo Jr. put together for Reebok.

“If you’re sitting on the couch for hours you’re not doing anything to improve yourself,” Badillo tells Reebok. “I’m always active, on my feet, up and about and doing something. You don’t need that much space at all to do a fun workout.”

Before you hit play on the next episode (or while you wait out that inevitable HBOGo delay), grab a set of four cones (or four small objects to mark the space) and clear out room in front of the TV for this heart-pumping workout.

“These exercises will help with speed, agility and total body strength,” Badillo says. “Make sure to stay on your toes, pump your arms and keep your body relaxed to move around the cones as fast as possible.”

For the entire length of the opening credits, do the Plant and Loop

Set up two cones about four feet apart. Plant your outside foot and loop around one cone, turning back toward the other. Continue to loop around the cones.

Every time there is a death by sword, do the Two-Step Weave

Set up three cones in a line, with two feet between each. Zigzag through the cones laterally 10 times, bringing both feet to the outside of each cone before moving on to the next one.

Every time you see a dragon, do the Plant and Go

Set up three cones in a line. Plant your left foot and take an explosive step through the gaps between the cones, repeating through the line of cones 10 times.

Every time someone takes off or puts on a fur coat, do the Up and Back

Set up four cones in a line, with each cone about two feet apart. Move laterally through the line 10 times, stepping in front of and then behind each cone.

Every time someone has a glass of wine, do the Figure 8

Set up two cones two feet apart and run in a figure 8 pattern around them 10 times.

Every time someone gives you a spoiler, do the In and Out

Set up four cones in a row about two feet apart. Step each foot through the gaps and back, one foot at a time, for 10 repetitions.

We can’t promise that you’ll be able to crush skulls like “The Mountain” after this workout, but that’s probably a good thing.