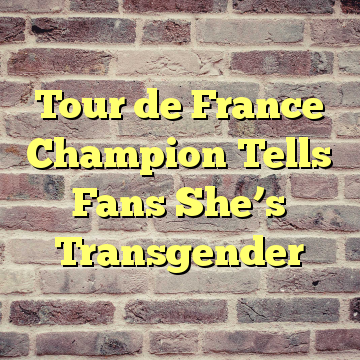 Philippa York, a cycling hero previously known as Robert Millar, has announced that she is a transgender woman. In a statement on CyclingNews.com, York, 58, opened up about the gender transition process she began in the early 2000s: “The outcome of that journey has meant that for a considerable time now I have lived as Philippa,” she wrote.

York—who won the King of the Mountains prize in the the 1984 Tour de France, and finished fourth overall that year—is considered one of Britain’s best cyclists ever. And she’s now the first high-profile cyclist to speak out about transitioning. In her statement York credited society’s changing attitude as part of her decision to do so: “There’s a much better acceptance and understanding” of transgender people now than when she first started down this road, she wrote.

In an interview with The Guardian, York said she’s known she was “different” since she was five years old. “[W]hat that difference was and how to deal with it has taken a fairly long time to come to terms with.” She went on to explain that she didn’t feel “trapped” in the wrong body, “rather it was more a case of the life I was living wasn’t the one I felt I ought to be having.”

RELATED: The 50 Best Bike Rides in America, State by State

While York is now living as her true self, she acknowledged in her statement how challenging the medical transitioning procedures can be: “Although the end result is seen as a happier, more stable place, the emotions encountered to get there make for some very vulnerable periods.”

One of the reasons York chose to introduce her new identity to the public now has to do with her return to the racing world, after a nearly two-decade hiatus. At this year’s Tour de France, she will appear as a commentator for British television station ITV4.

“I really am delighted to have accepted this new challenge with ITV4,” York wrote. “I’m looking forward to the racing immensely and in terms of my personal and professional development I think this is the right time to return to a more active role in cycling too—the sport I’ve always loved.”