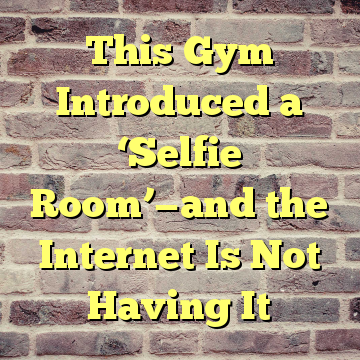 While scrolling through the social media accounts for The Edge Fitness Club, a gym franchise in Connecticut, one thing is very clear: their members love a good sweaty, workout selfie. You’d be hard-pressed to find an image in the gym’s IG feed that does not depict someone weight lifting or showcasing their post-workout abs for the camera. Basically, it’s the ultimate fit-spiration.

While some people would die of embarrassment from flexing their newly-defined triceps in a selfie, there are many others who don’t think twice about snapping pictures of their booty in front of a mirror at the gym. Plenty of people want to document —with clear, visual evidence—their fitness progress, and who are we to judge?

After noticing that many of their members love a good gym selfie, The Edge recently commissioned an online survey conducted by The Harris Poll of 1,500 adults to learn more about the trend. The result? A whopping 43% of the respondents said they had taken photos or videos of themselves at the gym, and 27% of those photos were in selfie mode. Armed with these numbers, the gym decided to pioneer its way to offering the first ever “selfie room” at their Fairfield, CT, location. Members were told they would soon be granted access to the photo room, which would be equipped with good lighting, hair products, and fitness accessories to help them optimize their gym selfie to the absolute fullest. (And no, it wasn’t an April Fool’s joke, apparently.)

But gym-goers quickly took to social media to clue The Edge in on how they really felt about the so-called selfie room, and it was not pretty. At all.

Not everyone was against the idea, though.

Regardless, the backlash was enough to make the gym rethink their plan. “As of now, we are unsure if The Edge will be putting this on hold indefinitely or if it will come to fruition,” a PR representative for the company told Health in an email. “The Edge is taking into account the feedback they received from our members and are evaluating from there.”

So, April Fool’s after all?