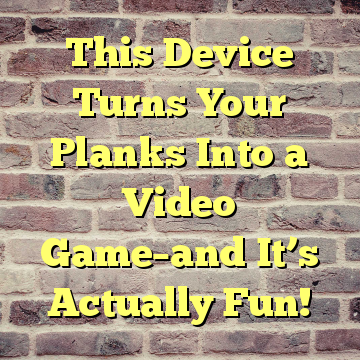 At first glance, the Stealth Core Trainer might remind you of a piece of workout gear from a late-night infomercial. (Anyone else remember the Ab Dolly?) But unlike the as-seen-on-TV equipment now gathering dust under countless beds around the country, the Stealth gadget involves an addictive video game that might just help you stick to a regular core workout. The device and its app actually make planks fun.

Skeptical? Here’s how it works: The Stealth is like a balance board. The platform sits on an unstable base, and you rest your forearms on top, in plank position. Between your arms, there is a slot for your phone.

Once you hit start on the video game, you play by changing your plank position ever so slightly to explode colorful targets. Each round consists of isometric plank holds, subtle forward and backward tilts, and twists and dips to work your obliques.

Fresh off a recent plank challenge of my own, I was psyched when the folks at Stealth offered to send me a trainer to try. It took just a few attempts for me to get the hang of it. I learned quickly that the faster I shifted around in plank position, the more points I could rack up in the game before my core started trembling and I had to call it quits. Surprisingly, time flew by–and before I knew it, a minute was up. After two weeks, I could hold a plank for 90 seconds–and I had nearly tripled my score from 41 to 111.

More than a little competitive, I felt a twinge of pride every time I hit a new record time, or a new high score. If I didn’t beat my score the following day, what was even the point of trying?! (Okay maybe I’m too competitive.) But seriously, knowing you can probably eke out a few more points each day may be enough to keep you coming back for more, too.

I made an account so I could log onto the app and see how my scores compared to other Stealth plankers. I tinkered with the filters on the leaderboard, and found that sorting by age, sex, and location revealed some impressive stats: Other women my age in the U.S. were racking up hundreds and hundreds of points; some were holding planks for longer than five minutes. With some diligence, I figured I could crack the top 20–a new competitive drive to keep me hooked!

But there was one downside I discovered: While becoming hyper-focused on my score was 100% helpful in terms of distracting me from the slow tick-tock of the clock, I began sacrificing good plank form to score additional points in the game. On certain days, my arms and shoulders felt like they got a better workout than my core–and I knew I needed to refocus on dominating the game from my abs.

To get our top stories delivered to your inbox, sign up for the Healthy Living newsletter

If you have a competitive nature, it’s worth checking out the Stealth Core Trainer. Yes, it’s pricey (and takes up a good amount of space), but it might be the fun addition your core routine desperately needs.