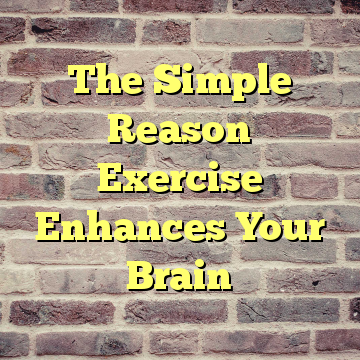 Evidence keeps mounting that exercise is good for the brain. It can lower a person’s risk for Alzheimer’s disease and may even slow brain aging by about 10 years. Now, new research helps illuminate how, exactly, working out improves brain health.

In one research review published in the British Journal of Sports Medicine, researchers examined 39 studies that looked at the link between exercise and cognitive abilities among people over age 50. They found that aerobic exercise appears to improve a person’s cognitive function and resistance training can enhance a person’s executive function and memory. Other exercises like tai chi were also linked to improvements in cognition, though there wasn’t as much available evidence. Ultimately, the researchers concluded that 45 minutes to an hour of moderate-to-vigorous exercise was good for the brain.

“There is now a wide body of research showing that the benefits to the body with exercise also exist for the brain,” says study author Joe Northey, a PhD candidate at the University of Canberra Research Institute for Sport and Exercise in Australia. “When older adults undertake aerobic or resistance exercise, we see changes to the structure and function of areas of the brain responsible for complex mental tasks and memory function.”

RELATED: Here's What Playing an Instrument Can Do for Your Brain

But how does exercise have these effects? Another new study presented at the American Physiological Society’s annual meeting in Chicago explored one possible way. In the study, researchers from New Mexico Highlands University found that when people walk, the pressure of making impact with the ground sends waves through the arteries, which increase blood flow to the brain (also called cerebral blood flow). Getting enough blood to the brain is important for healthy brain function, since blood flow brings the brain oxygen and nutrients.

In the small study—which has not yet been published—researchers used ultrasounds to assess arteries and changes in cerebral blood flow in 12 healthy young adults while they were standing, walking and running. The increases in blood flow were greater when the men and women ran, but walking was enough to spur the effect. “[Increased cerebral blood flow] gives the brain more to work with,” says study author Ernest R. Greene, a professor of engineering and biology at New Mexico Highlands University. “It’s another positive aspect of exercise.”

Scientists are still exploring multiple ways by which fitness improves the brain. But blood flow is a promising path, since it can also help create new brain cells. The protein BDNF (brain-derived neurotrophic factor) also seems to play a role because it helps repair and protect brain cells from degeneration. Exercise can also boost mood by triggering the release of feel-good hormones and chemicals, like endorphins, which can improve brain health. A 2015 study found that exercise may be able to prevent the onset of depressive symptoms.

“Each type of exercise seems to have different effects on the growth factors responsible for the growth of new neurons and blood vessels in the brain,” says Northey. “That may indicate why doing both aerobic and resistance training is of benefit to cognitive function.”