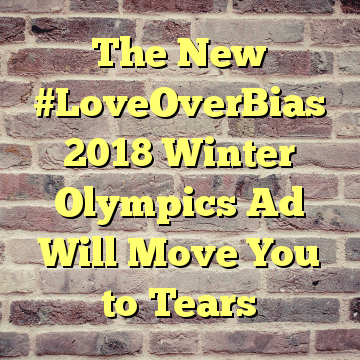 Whip out that pack of tissues. With the 2018 Winter Games less than 100 days away, household products giant Procter and Gamble has just released their latest heartstrings-tugging Olympics video campaign.

Just as they did in previous years, P&G themed the campaign around the moms of athletes. “Thank You, Mom” is a tearjerker of a tribute, highlighting the love and support of the mothers of the competitors who will be going for the gold in PyeongChang, South Korea in February.

But this year’s video series also takes on a hot-button topic: bias. Titled “Love Over Bias,” the campaign’s first ad features a montage of moms watching their adorable children chase their sports-related dreams, from figure skating to ice hockey. The children all come from diverse backgrounds in terms of race, ethnicity, and disability.

Like all moms, the mothers in the video want the best for their kids, encouraging and supporting them in a world that doesn’t always appreciate diversity. The vignettes focus on real Olympic athletes and their personal stories about struggling to make it in the face of bias and stereotypes.

To go along with the new campaign (more videos have been released on YouTube), P&G has launched the hashtag #LoveOverBias. The aim is to start a conversation about differences and diversity, support competitors, and build anticipation for the Olympics, one of the few worldwide events that brings together people across the globe.