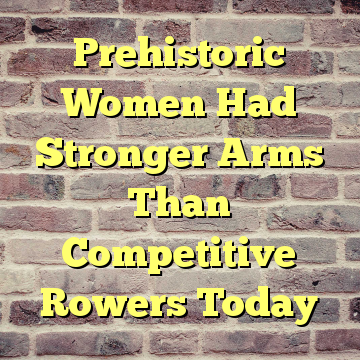 Today’s athletes may be strong, but they’ve got nothing on prehistoric women who spent their days harvesting crops and grinding grain. According to a new study in the journal Science Advances, the average woman who lived during the first 6,000 years of farming had stronger upper arms than modern-day female rowing champions.

The study “highlights the scale of women’s labor in prehistoric agricultural communities, and the hidden history of women’s work across thousands of years of farming,” says study author Alison Macintosh, a postdoctoral anthropology researcher at the University of Cambridge in the UK.

Previous research has compared women’s bones to men’s of the same era, the authors write in their study. But male bones respond to strain in a more visibly dramatic way than female bones, they explain, which has caused scientists to underestimate the true nature and scale of the physical work done by women in prehistoric societies.

In this study, researchers used a CT scanner to analyze the arm and leg bones of living women, and compared them to those of Central European women who lived between 7,400 and 3,500 years ago—a time period that included early Neolithic agricultural eras into the Middle Ages. The living women were selected to represent a range of physical activity levels and included runners, rowers, soccer players and people with more sedentary lifestyles.

The researchers found that the early Neolithic skeletons (women who lived between 7,400 and 7,000 years ago) had leg bones of similar strength to today’s female athletes. But even when compared with women on Cambridge’s championship rowing team, the prehistoric women’s arms were 11-16% stronger for their size. They were also 30% stronger than the arms of the non-athletes analyzed in the study.

The researchers suspect that the early women’s superior arm strength came from the daily work they likely put in tilling soil, harvesting crops by hand and grinding grain to make flour. “For millennia, grain would have been ground by hand between two large stones called a saddle quern,” says Macintosh. “In the few remaining societies that still use saddle querns, women grind grain for up to five hours a day.”

Women were also likely involved in fetching food and water for livestock, processing milk and meat and converting animal hides and wool into textiles—evidenced by the variety of different behavior patterns reflected in their bones. Prior to the invention of the plough, the authors say, they also spent time manually planting, tilling and harvesting crops.

“By interpreting women’s bones in a female-specific context, we can start to see how intensive, variable and laborious their behaviors were,” says Macintosh. Comparing their bone characteristics to living people—whose exercise levels are known—also provides a better understanding of the real amount of physical activity these women got on a regular basis. (The Cambridge rowers, for example, trained twice a day and rowed an average of 75 miles a week.)

“It can be easy to forget that bone is a living tissue, one that responds to the rigors we put our bodies through,” Macintosh adds. Bone reacts and adapts to strain—like physical impact and muscle activity—by changing in shape, curvature, thickness and density.

MORE: Why Weight Training Is Ridiculously Good For You

Bone strength is affected by factors other than behavior, Macintosh says, including genetics, nutrition and overall health. These differences between prehistoric and modern women could affect some of the results, she says, although behavior “is still likely to be responsible for the bulk of these differences that we’re seeing.”

“Our study suggests that this labor was likely more rigorous and intensive than what is required of most living rowers in their sport,” says Macintosh. “Our work also highlights the huge variability in the daily activities of women, giving us a wider appreciation of the scale and variability of things that women were likely doing in their daily lives.”

In today’s industrialized societies, strenuous physical activity is less common and easier to avoid, Macintosh adds—and for the human species as a whole, bone strength and mobility have suffered because of it. The study serves as an important reminder, she says, about the importance of exercise—recreational or otherwise, and for men and women alike—for building and maintaining healthy bones.