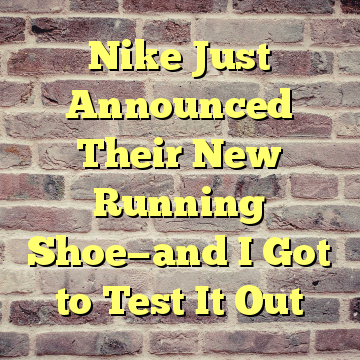 When it comes to next-level sneakers, Nike always seems to be on the cutting edge, and today is no exception. The athletic brand just announced its latest development, the new Nike Epic React Flyknit ($150), a running shoe that saw 17,000 miles of testing.

The result: a runner that is lightweight, durable, soft, and provides energy return.  According to the press team over at Nike, “It’s ideal for distance workouts, recovery runs, and progression runs. It will be particularly appreciated by the everyday runner who wants their run to feel more enjoyable.” Basically, if you have a foot and you love to run, this shoe will put a smile on your face.

Unfortunately, you won’t be able to get your hands on the Nike Epic React Flyknit until February 22 (I know, I know); however, I scored a pair ahead of the release date and have literally done some of the legwork for you.

My first encounter with the Nike Epic React Flyknit was in early November 2017—for about 10 minutes. As Nike employees watched, I stepped onto a treadmill in the brand’s NYC headquarters and ran for a little over a mile. Afterward, I typed a note on my phone that said “Light. Nice feel. I like. Familiar.” So these six words were literally my first reaction to this new silhouette.

Fast forward two months, when I got my very own pair of the new Nike running shoes, and was able to spend some more time and miles in them—both on the treadmill and around the running trails of Central Park. Now my opinion is a bit more informed. Here are my thoughts:

RELATED: The Best Reflective Gear for Running at Night

They are sleek and streamlined, but still look cool enough to turn heads. I find it a little weird that the midsole extends beyond the heel—but I only notice that when I am sitting with my legs crossed. On a personal note, I prefer the navy colorway to the white.

They are super comfy without being overly soft. Stepping into them is like pulling on your favorite pair of slippers. The weaving of the Flyknit upper feels tighter and sturdier than other Nike models I’ve worn, but still has enough give so that your foot won’t feel restricted. The shape and cut of the collar of the shoe worried me at first, because I thought I might experience rubbing, which would led me to retire these babies early. Luckily, there was no rubbing. In fact, it kind of just felt like I was wearing a low-cut sock.

RELATED: Everything You Need to Know About Runner’s Knee–Even If You’re Not a Runner

There are perforations along the front top portion of the shoe, making it super breathable. The temperature during my outside runs has hovered around the low 40s, and my feet were never freezing, so I’d say that they are suitable for chilly days. That beefy midsole, which is made of the new Nike-only proprietary technology React Foam, is what all the hoopla over this new release is about.

This foam, which took more than 400 combinations of chemistry and processing to develop, is what makes you feel lighter and frankly faster on your feet. Also, the midsole and outsole are kind of one in the same here. The only distinguishing factor, in my opinion, are the pieces of clear rubber that are affixed to the forefoot and heel that add much-needed traction and make the shoe more durable.

I would be remiss if I didn’t note that this shoe reminds me of both the Brooks Levitate and the Adidas Ultra Boost  running shoes, two runners that are currently in heavy rotation for me. The Nike Epic React Flyknit feels noticeably lighter on my feet than these other two styles though, which is a big selling point for me. But, it isn’t as springy and responsive as the Brooks Levitate, nor is it as much of a lifestyle crossover kick as the Adidas Ultra Boost.

That said, I think the Nike Epic React Flyknit is a good solid addition to the running space, and I am looking forward to continuing to pound the pavement in them over the next couple of months.