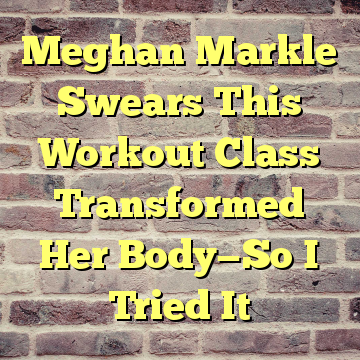 Who Tried It: Julie Mazziotta, PEOPLE writer and reporter

Level of Difficulty: 9 (on a scale from 1 to 10). I don’t have kids yet, but I couldn’t help but wonder if the burn was similar to the pain of childbirth.

“Pilates Platinum is hands down the best thing you could do for your body,” Markle, 36, told Women’s Health U.K. “The results are incredible.”

“Your body changes immediately … give it two classes and you will see a difference.”

Another studio where the former Suits star goes for her Megaformer fix is Studio Lagree, which has locations in her old and new hometowns of Toronto and London. And, lucky for me, they just opened a new studio in New York City. So I headed to Astoria to try Markle’s favorite workout.

I went into the class a little smug — I do CrossFit four times a week, run on the other days, and I’ve tried everything from Pure Barre to The Fhitting Room to Flywheel. But the Megaformer classes are a whole new animal.

Our class was led by Dede Lagree, who, along with her husband Sebastien, runs the main Lagree Fitness Studio in Los Angeles. We were using their brand-new Megaformer 3K machine, which is recognizable to anyone who has tried Pilates before. But this class takes it up a notch.

Dede dove right in with lower body exercises. The goal is to be constantly moving, but slower is better, for an extra burn. We started in a squat, with one foot on the stationary part of the machine, and the other on the sliding platform, and slowly moved our legs in and out. It. Was. Painful. We were only one exercise in and already getting the infamous “Lagree Shakes.” But it was a good sign that our muscles were already working and burning.

“I think the reason why it’s so challenging the first time is because you’re using muscles that you don’t activate if you’re on the floor doing other workouts,” Dede explained to me. “You have to use your core, you have to use the muscles in your legs, to help with the stability while you’re in the exercises.”

We cycled through more leg work, from weighted donkey kicks to sliding split squats for 30 straight minutes, and I (along with the rest of the class!) had to take frequent breaks to calm my spasming muscles. From there we went on to core work, like sliding planks, and then finished off our workout with arm exercises with the hand weights attached to the Megaformer. Thankfully, I found the arm exercises fairly easy, which is the only reason why I gave this workout a 9 instead of a 10.

The Megaformer class was incredibly tough, but it’s definitely an amazing workout (a point my sore thighs are making today). Dede says that you can torch 800 to 1,000 calories in a single, one-hour class, but the calorie burn continues for several hours.

“The reason why is it’s so slow, and you’re using every single muscle,” she says. “While your slow-twitch muscle fibers repair, your body is using energy, calories and stored sugar so you honestly become a fat-burning machine.”

The Verdict: I had a hard time with this class, and was begging to go back to a CrossFit WOD as we used the Megaformer — but 24 hours later I wanted to tackle it again! There’s nothing like a good challenge.