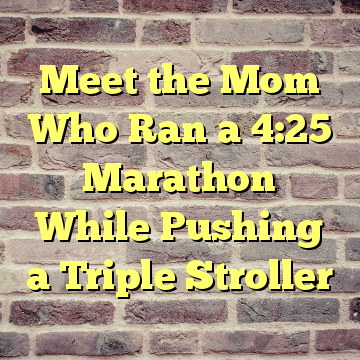 A Montana mom proved to be a real-life Wonder Woman earlier this month when she crossed the finish line of a marathon in Missoula with three of her kids in tow. Theresa Marie Pitts, 38, ran the 26.2 miler while pushing a triple stroller in under 4 hours and 30 minutes, breaking a Guinness World Record in the process. Her official race time: 4:25:37.

What makes Pitts’ feat all the more amazing is that this was her first marathon. Though she has always loved running, the mother of eight didn’t begin training regularly until a few years ago, just after the birth of her sixth child. “I was in a depressive slump,” she explained in an email to Health. “[I] was searching for a healthy way to get back on track mentally, physically, and spiritually.”

Her first race was a sprint triathlon. Then two years ago she ran a 5K while pushing a double stroller. “I loved the idea then that I might be able to set a positive example of whole health and wellness, and share my message of hope and healing to those who struggle with mental illness and related disorders,” she says.

Pitts began training for the marathon (as well as a half-marathon in June) while she was pregnant with her eighth child. “It was winter so most of my runs were done on a treadmill,” she says. But once her newborn daughter was five weeks old, she started “serious training” on long-distance runs with her three youngest kids in the triple stroller, with “lots of padding and head support.”

Come marathon day, with the stroller, supplies, and children (ages 4, 2, and 5 months), Pitts was pushing 150 pounds. But all her prep work paid off. She only had to pause twice during the race: once at mile 6, when her two-year-old son’s seatbelt got unbuckled; and again at mile 8, when the baby was crying and needed to be comforted.

Around mile 20, her pace began to slow, Piits says. She felt sick, exhausted, and in pain. But she thought to herself, “‘You’ve gotta dig deep here ’cause the 4:30 pacers are passing you up!'” That mindset helped her push to the finish line.

For more fitness stories, sign up for the HEALTH newsletter

Pitts says that one of the reasons she runs these races is to set an example of “mental toughness” for her kids, and to “help them develop the attitude of, ‘No excuses, I can do hard things!'”

But she also wants to show there’s hope for anyone who may be struggling with their mental health like she once did. Or as Pitts puts it, she wants  to “inspire someone else to create an awesome ending to their own story.”

What’s up next for the supermom? “I am already planning on running another half-marathon in September with my littles,” she says. And yes, she’ll be pushing her three youngest kids for all 13.1 miles of that race too.