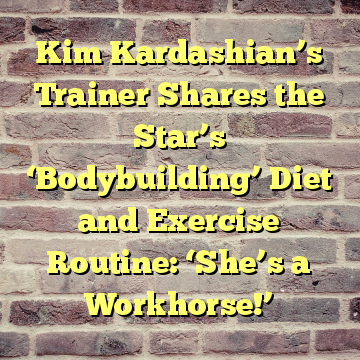 Melissa Alcantara remembers the May phone call from the production team of Keeping up with the Kardashians.

“They were like, ‘Are you available to train Kim on Monday?’” the former bodybuilder tells PEOPLE. “I was like, ‘Of course I’m available!’ And it went from there.”

Within days, Alcantara met Kardashian and the pair hit it off. Soon Alcantara was relocating to Los Angeles where she began training Kardashian full time, putting the reality star on a weight training program and a diet of healthy whole foods.

“Kim told me, ‘I love my body. I love the way it looks and I love my hips,’” says Alcantara. “She just wanted more muscle. She wanted bigger hamstrings, which accentuates the entire leg. And she wants those cut arms and abs!”

These days Alcantara heads to Kim’s home six days a week at 6 a.m. for workouts focusing on specific body parts: shoulders, biceps/triceps, and chest/back, as well as three days devoted to legs. They also do cardio — either short bursts of high intensity, or longer, low-intensity walks.

“She loves and hates leg days,” says Alcantara. “But she’s committed! She knows what it takes, but it’s also really grueling. It’s heavy, it’s killer, but she’ll be like, ‘Alright, let’s do it!’ She’s a workhorse.”

Adds the trainer: “Kim has been getting some really nice results, like with her triceps! She can’t believe how much has changed over the last few months. And when you’re in this deep, it’s hard to go back. She just keeps it up. She’s focused and she has a goal in mind.”

Kardashian and Alcantara also bonded over the challenge of post-baby bodies.

“When we met, Kim told me she’s tired of doing little diets,” says Alcantara, who reveals that she gained 70 lbs. when pregnant with her daughter Isabella, now 6. The trainer was inspired by Insanity, created by powerhouse fitness instructor Shaun T. — she even starred in his videos — and became committed to a balanced meal plan to get herself healthy. “I lost 40 lbs. after 60 days,” she says. “That program set something off for me.”

Says Alcantara of Kardashian, mom to 2-year-old Saint and 4-year-old North: “She didn’t want to be skinny. She wanted to have muscle and feel strong. And she wanted to find something she can do for the rest of her life. I totally understood where she was coming from.”

When it comes to nutrition, Alcantara works with Kardashian’s team of chefs, sending recipes and meal plans to ensure that the star is eating a balanced amount of proteins, carbohydrates and fats.

A typical day might feature Alcantara’s blueberry oatmeal pancakes for breakfast (“Kim loves them!”); chicken, sweet potatoes and veggies for lunch; and fish and veggies for dinner. “Kim told me the other day, ‘This is the most vegetables I’ve ever eaten!’ ”

Processed foods are off-limits, so no crackers or cookies. Says Alcantara: “I want her to eat real food that’s cooked every day. Most likely if it comes out of a box, it’s not going to be good for you. She’s eating well and she feels good.”

And even though she indulges in the occasional piece of banana bread for a treat, Kardashian is mostly sticking to her healthy regimen. Says Alcantara: “Recently she told me she had some fries that were really greasy and it made her stomach feel bad because she wasn’t used to it. Which is great because after that, you’re less likely to go for those foods!”

And when it comes to getting — and staying — healthy, Kardashian is showing off more than her fit body. “Her kids watch her work out a lot of the time,” says Alcantara. “They see her struggle and they watch her work. I’m sure that will pass down to them. And that’s a really cool thing.”