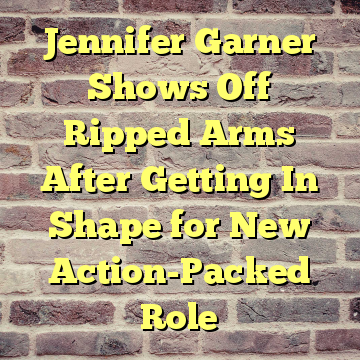 Thanks to a new movie role, Jennifer Garner is in amazing shape.

While making an appearance at CinemaCon on Tuesday, the actress, 46, talked about amping up her workout routine for the upcoming action-thriller Peppermint, in which she plays a lone vigilante out to avenge the death of her family.

“It actually felt really good,” she said. “I was in pretty good shape going into it.”

Garner added boxing and martial arts into her workout routine to help prepare her for intense fight scenes.

“Everyone gets very invested and are you going to actually look the way we want you to look,” she said. “I don’t know if I did, but I just always followed what felt right to me.”

The actress shared a look at her gym sessions on social media earlier this year. She posted a video of her extreme workout routine, which she dubbed the “Recipe for Turning A Mom Back into Action Lady.”

Garner explained in the caption that she did an hour workout with Body by Simone and 90 minutes of “stunt team.” She also worked cryotherapy into her routine. For her pump-up playlist, Garner set the footage to “Canned Heat” by Jamiroquai.

Peppermint also marks Garner’s first return to action since starring as an international spy in the ABC hit show Alias.

“The thing about Alias that made it so special was J.J.’s [Abrams] script, and how compelling the stakes were for that character all the time,” she said at CinemaCon. “To do action for the sake of action has never interested me but this script was so smart. There’s no bigger stake than your children and nobody had never asked me in a smart way to do something as a mom for her child.”

She continued: “This was to avenge your child’s death, and there’s no bigger reason to go out and get into really good shape and then kill people.”