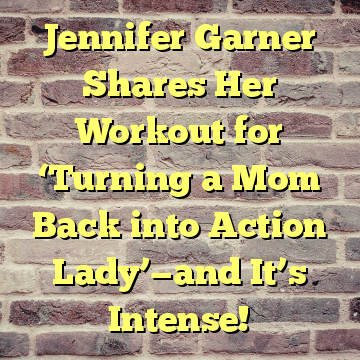 Jennifer Garner has the formula, but she forgot one obvious ingredient: hard work!

The 45-year-old actress shared a video to Instagram documenting her extreme workout routine, which she dubbed the “Recipe for Turning A Mom Back into Action Lady.”

The remedy called for an hour workout with Body by Simone, 90 minutes of “stunt team,” 50 cups of coffee and three minutes of cryotherapy every day. For her pump-up playlist, Garner set the footage to “Canned Heat” by Jamiroquai.

“Good luck everybody!” she wished her followers.

Garner did not specify why she was kicking her fitness up a notch, but perhaps it’s for a starring role in the action film Peppermint, which Deadline describes as “John Wick, with a female protagonist.”

And all this focus on fitness comes on top of being a mom. Garner has three kids — Violet, 11, Seraphina, 8 and Samuel, 5 — with Ben Affleck. The duo broke off their 10-year marriage in June of 2015 and officially filed for divorce in April.

The actress recently posted a sleepy, makeup-free selfie from the inside of a tent, announcing that she was in the midst of a “Yes Day” — a family tradition in which the parents indulge all their kids wishes (within reason). This is the fifth year Garner has celebrated the unofficial holiday.

“You’ll never need coffee more than the day after ‘Yes Day!’ ” she captioned on Instagram. Along with a series of hashtags explaining that she and the kids had slept in a tent in the backyard. She added that “coffee” is her “Yes Day.”