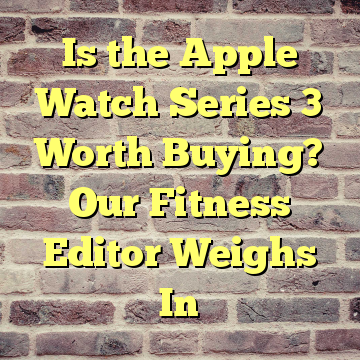 Nothing gets folks more excited than a new gadget, and today the world is all abuzz with news of Apple’s latest release: the Apple Watch Series 3 has officially arrived.

Available in two sizes, 38mm and 42mm, and gold aluminum (in addition to classic silver, space gray aluminum, stainless steel, or space black stainless steel), this new wrist bling makes major functional strides from previous versions. The most notable change is built-in cellular access that shares the same number as your iPhone, starting at $399. (There is also a version without cellular that starts at $329.) This is huge. No longer tethered to your phone, you can go off into the world (or maybe just for a run, bike ride, or errand) and leave your smartphone at home, but still be able to make calls, receive texts, use GPS, stream music through Apple Music (available later this fall), talk to Siri, and, yes, pay for that post-run cup of Starbucks. The extra convenience comes at a cost, of course—for cellular access, you’ll pay more in your current monthly cell phone bill (prices vary depending on provider).

Equally cool, Apple was able to add technology upgrades (hello, 70% faster dual-core processor, in-screen antenna, and eSIM card) into the Series 3 without noticeably altering its size. It’s physically comparable to the Series 2, save for the extended back crystal, which is about as thick as two sheets of paper. Not bad. The only other visual cue that you’re sporting the newer version is a red dot on the crown of the watch, which is meant to distinguish between the cellular and non-cellular versions.

Let’s talk battery life, always a big concern for consumers. The Series 3 is supposed to be able to keep on ticking all day long, and thanks to the bigger processor, it should run more efficiently too. Keep in mind, though, that this device is not intended to totally replace your smartphone (at least not yet)—it’s more for mixed-usage purposes. In other words, a hours-long gabfest with your bestie via your wrist could definitely drain the battery.

Also good: the new operating system, watchOS 4, which comes with the Series 3, is pretty cool. You’ll have access to a slew of new features, including an updated Heart Rate app (it alerts you to spikes in heart rate even when you’re not working out), a new Siri watch face, upgraded Workout app with custom HIIT workout type, and more. It’s also worth noting that it’s possible to download the new watchOS 4 operating system on older models (I did so on my Series 2) and reap most of the upgrades.

So should you buy the Apple Watch Series 3? I just got my hands on one and I’ll be testing it for the next week. But so far, I’ve been impressed with how intuitive the Series 3 seems to be compared to previous versions. The upgrades to the Workout app also caught my eye (my favorite feature: when you start running, a little icon of a person runs on the screen with you). I even made my first watch-based call with a little help from Siri, and it was exciting to not have to rely on my phone.

There have been reports of issues with the cellular function on the Series 3 (some of the watches are allegedly connecting to unauthenticated wireless networks, and the company is investigating a fix). That said, if you’re someone who wants to be able to go phone-free, this may be the wearable you’ve been waiting for. If that’s not a major concern for you, perhaps consider the non-cellular version.

For all the runners out there, keep in mind that there’s an Apple Watch Nike+ Series 3 version launching in October. So many choices, so little time.