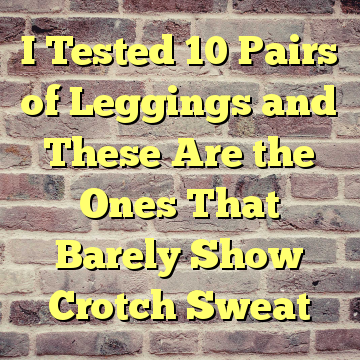 I have a confession: I am a heavy sweater. Seriously. I literally sweat buckets during my workouts. There isn’t a time when I don’t emerge from a run or an exercise class completely drenched—even after yoga. And that’s not necessarily a problem, except for one telltale sign that indicates I’ve been kicking butt in the gym: my crotch sweat prominently displayed on the front of my workout pants. It. drives. me. crazy.

But it’s also completely normal. “Your body’s heat zones are in the trunk area, from your shoulders to the mid-thighs,” explains Michele Olson, PhD, a professor of exercise physiology at Auburn University in Alabama. “Your body’s organs are in that area and they are working like crazy when you exercise—the metabolism of your heart, liver, kidneys, adrenal glands—it’s like it’s on warp speed, so you accumulate a lot of sweat in that area, which includes your crotch.”

And unlike your armpits, which receive some drying air as you lift and lower them, your thighs remain relatively close together, making it harder for sweat there to evaporate, notes Olson. Basically, it’s something you just have to deal with. So I set out to find a pair of workout leggings—that weren’t basic black!—that would help camouflage down-there sweat.

I sweat-tested a bunch of bottoms (I’ll spare you the sweaty photos on my phone). And while none of the ones I tried completely hid sweat, two did stand out from the pack—and they both happen to be navy.

I wore these on a five-mile outdoor run, so I was super surprised at how little sweat there was in the crotch area when I stopped to stretch. And to be honest, I didn’t really notice the sweat mark until I snapped a close-up picture. This pair is also available in basic black.

I sported this pair, which also comes in a chic plum color, for a HITT workout (think step-ups, squat hops, burpees). While water was dripping from my limbs, the front of my pants (at least visually) stayed relatively dry. Also handy: the hidden hip pocket that is perfectly sized for keys and some cash.

That said, as awkward as it may be, I probably should learn to just embrace the crotch sweat. After all, it’s kind of a workout badge of honor, am I right?