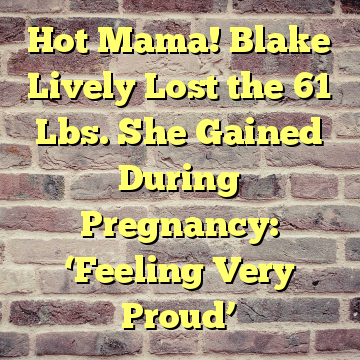 The actress, 30, showed off her newly-ripped body after 14 months of hard work with her trainer, Don Saladino, to lose the weight she gained during her last pregnancy.

“Turns out you can’t lose the 61 lbs. you gained during pregnancy by just scrolling through Instagram and wondering why you don’t look like all the bikini models,” Lively joked on Instagram. “Thanks @donsaladino for kickin my A double S into shape. 10 months to gain, 14 months to lose. Feeling very proud.”

Lively is mom to daughters James, 3, and Inez, 16 months, with husband Ryan Reynolds. After her pregnancy with James, she felt like her body was different, but she was okay with that.

But then Lively quickly jumped into shooting The Shallows, and had to be in surfer shape within 10 months, which she said was a “nice advantage.”

“I’ve never been in that great a shape in my whole life,” she said. “So to do it after having a kid was actually really nice. Because you see your body after having a kid and it’s beautiful because you just gave birth, but it’s also ‘Oh my god, this is not what my body looks like.’ You feel like you’re never going to get your body back again.”

Lively also worked with Saladino ahead of The Shallows, and followed a strict gluten- and soy-free diet.

“I did no gluten and no soy,” she said. “Once you remove soy, you realize you’re eating no processed foods. So that’s basically what I did. No processed foods and then working out. [It] seems like, ‘Oh, that’s really easy to cut that out,’ but then you realize, there’s soy in everything. Like, everything you eat, there is soy in it. Even if it’s healthy, Whole Foods-organic stuff, there’s always soy in it.”

But luckily, Lively didn’t have to cut out everything delicious.

“I was still able to have sugar and all of those things. It’s all in moderation. You just have a balance of protein, carbs, and vegetables. And it wasn’t the worst. Like, I was eating rice and sushi.”