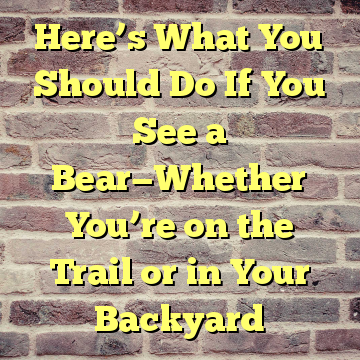 The following advice is excerpted from LOOK BIG: And Other Tips for Surviving Animal Encounters of All Kinds ($15, amazon.com).

It’s awe inspiring, if terrifying, to see bears in the wild. It’s also rather jarring to watch them crawl up the carpeted stairs of a ski condo while a guy hiding in the closet films it on his phone, then posts it on YouTube.

There are countless home videos like these online of bears where they shouldn’t be: climbing over a car windshield while a baby screams in the backseat; throwing a pool party in Connecticut, which was cute, in a NIMBY kind of way. There was also a recent incident at Lake Tahoe, not online, unfortunately: a tray of pot brownies, just out of the oven, left cooling on the windowsill while everyone went out for a walk. When the people returned, they found that the bear, like Goldilocks, had eaten them all up.

Encounters with black bears are on the rise, says Ann Bryant, director of the Lake Tahoe–based BEAR League. “Twenty years ago, we’d get five calls a day; now we get two hundred,” she says: there are more tourists, more locals living among the bears—­then leaving windows open, food out, trashcans filled—­and never learning how to properly live with them.

“Fifty percent of the time, we coach idiots,” says Bryant. Like the dad who smeared peanut butter on his toddler’s nose, then waited for a bear to lick it off (photo op, he’d explained) or the dude who left a cookie trail leading from his backyard to his couch because he thought it’d be fun to, you know, film a bear eating cookies while watching TV.

Please don’t feed the bears! When they get too used to humans, they become a danger to themselves and us.

RELATED: 50 Day Hikes You Must Add to Your Bucket List

What to do if you see a bear

In a heavily human place like Tahoe or Whistler, if a black bear is on your turf (deck, driveway, campground), it’s simple, says Bryant. Be inhospitable. Clap, stomp, pound the window, yell. It’ll flee. Squirt guns, beach balls, small stones (thrown at its butt) help scare it off, too. “Black bears are big chickens,” she promises.

However, if you see a black bear or grizzly in the wild, on its own turf, it’s more complicated. Be respectful, a good guest. The number-one rule, according to Dan LeGrandeur of Alberta-­based Bear Scare: Stay calm (uh, okay). Don’t scream or turn your back. DO NOT RUN; it will chase you (bears can motor up to 35 mph). Give it space. Say hello, out loud, in your most soothing yoga teacher voice—­“Hi, bear. I’m human. Get the hell out of here, please,” while slooowly backing away in the direction from which you came.

It’s not about whether a bear is black or brown (and black bears can be brown, by the way), but how a bear is behaving, says LeGrandeur. “Read its signals.”

It’s either scared and asking you to go away (defensive) or wants to kill you and eat you (predatory). No pressure, but you need to figure that out fast.

Your behavior: Retreat gradually while turned sideways and avoiding eye contact. Appear as unthreatening as you know you are.

There’s a good chance the bear will leave. If it doesn’t and charges? “%#@&.” If it’s defensive—­most are—it’s bluffing. Probably. “At that point, it’s a hope and a prayer,” admits LeGrandeur.

“Every muscle in your body is telling you otherwise, but DO NOT RUN.” Instead, stand your ground and bust out the bear spray—­98% of people who use it (properly) are unscathed. Comforting.

RELATED: The 50 Best Bike Rides in America, State by State

Male grizzly: It depends. Is the bear defensive? Play dead. Predatory? Fight for your life.

Reprinted from LOOK BIG: And Other Tips for Surviving Animal Encounters of All Kinds Copyright © 2018 by Rachel Levin. Published by Ten Speed Press, an imprint of Penguin Random House LLC.