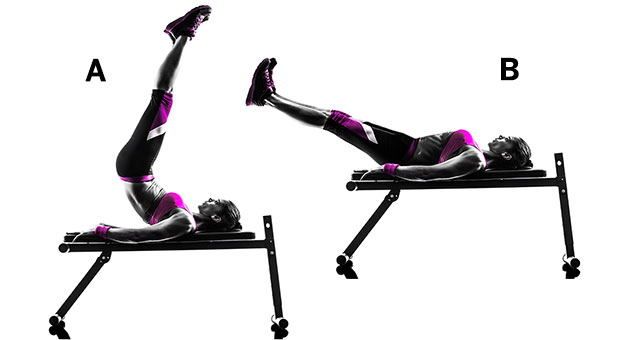 It’s hard to believe that Halle Berry has spent five decades on this earth, but it is indeed true. And the flawless beauty ushered in the milestone year yesterday with an ah-mazing Instagram photo in which she is sporting a lace coverup that, um, doesn’t cover up much. Her caption: “With open arms I welcome 50…I’m so blessed to be here!”

After we picked our jaws up off the floor (and tossed that doughnut into the trash) we quickly realized that the Oscar-winning actress is not just our 50-year-old #fitgoals, she is our everyday #fitgoals—especially when it comes to that streamlined stomach of hers. Shall we just go ahead and say her abs are on fleek!

To help us mere morals stay on the get-better-with-age path like Berry, we have a killer core exercise from her trainer, Nat Bardonnet, who you may have seen doing high-five planks with the mom of two in an Insta post a few months ago. (Clearly that’s another one of the pair’s favorite middle-whittling moves.)

The move: The Rocky. “It targets all of your abs—mid, low, and obliques—to lengthen your core, with beautiful definition,” says Bardonnet. Do 3 sets, performing as many reps as possible within a minute, 3 times a week to score a tighter core in about 5 weeks.

How to do it: Lie faceup on a bench, hands gripping it, with legs together and raised to 90 degrees so feet are toward ceiling. (No bench? Stretch out on the floor, anchoring yourself by holding on to a solid piece of furniture.) Use core strength to lift butt off the bench (A). Slowly lower it down, followed by legs, bringing to about a 30-degree angle (B). Keep lower back pressed firmly into the bench. Raise legs up, returning to start.