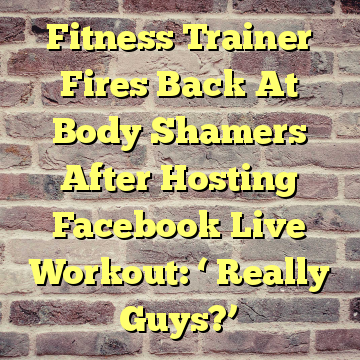 After hosting a workout on Facebook Live for USA Today, Sarah Gaines received a ton of praise for her at-home exercise routine. But the fitness instructor also got some negative comments about her physique.

The Boston-based trainer and Fit University founder saw notifications blowing up her phone with comments on the video such as “But the instructor is thick” and “OMG! She needs to lose a lot of weight.”

Another commenter wrote, “She needs to be doing it with them lol.”

While plenty of Facebook users stood up for Gaines, she wanted to respond directly to the criticism.

“I’m a bit thick, for sure. But fat? Really guys?” the trainer wrote in a blog post.

She continued, “If this would have been a few years ago, these comments may have really affected me. But after years of struggling with body image and obsessive fitness behaviors, I have no qualms with my body whatsoever so I was fine with the comments, I was just more so disappointed that people still believe that fitness equals six pack abs.”

Gaines advised her followers to surround themselves with positive people rather than those who “instead of getting up and doing the workout, just choose to sit there and comment rude and negative things.”

“The majority of mainstream media, with a few recent exceptions, has made us believe that to be fit means to be thin and ‘toned,’ ” Gaines told The Daily Meal. “While we’re starting to see a shift in that mindset, the comments made during the workout were a reminder that we have a ways to go.”