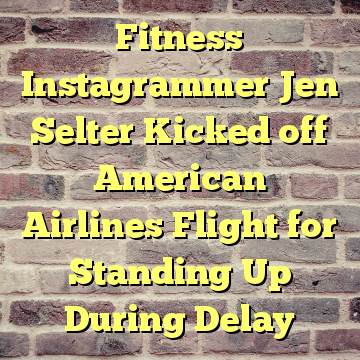 Fitness Instagrammer Jen Selter says she was kicked off an American Airlines flight for standing up while the plane was on the ground during a two-hour delay.

The model who popularized the “belfie” said she was standing up to stretch her legs during a delayed flight from Miami to New York on Saturday while other passengers were using the bathroom. A male flight attendant then approached and reprimanded her for getting out of her seat. Selter, 24, documented the incident in several Twitter videos.

“I was standing, putting my jacket up,” she explained to a pilot who came by to talk to her in the first video. “Clearly we’re all irritable, we’ve been sitting here for two hours.”

“I was obviously being sarcastic,” Selter said.

Security guards then arrived to remove Selter and her sister from the plane.

“People kept coming up to me, and then all of a sudden five male officers come up to me, and it was really frightening,” she told Good Morning America on Monday.

American Airlines tells PEOPLE in a statement that the incident was the result of a “disagreement.”

“Ms. Selter was asked to leave the aircraft after a disagreement occurred Saturday night at Miami International Airport (MIA). American offered her hotel accommodations and transportation, which she declined. She flew on American Sunday morning back to New York (LGA) – arriving around 8:30 a.m. ET yesterday morning.”

Another passenger defended Selter, yelling at the first flight attendant, “You’re harassing her. Why are you being aggressive?”

And an additional passenger elected to get off the plane with Selter after seeing how she was being treated.

“I saw what the guy did to your sister, she was just standing after two hours waiting in the airplane, and she was just standing because you and the other passenger went to the bathroom,” the passenger told Selter’s sister in a video. “And then one of the crew members, he came and just started shouting at her, harassing her. It was really bad.”

Selter said she’s sharing her story in the hopes that American Airlines reexamines their interactions with their passengers.

“I’m not here trying to say don’t fly American, I think they just need to make changes within themselves, and they have to treat passengers differently,” she told Good Morning America.