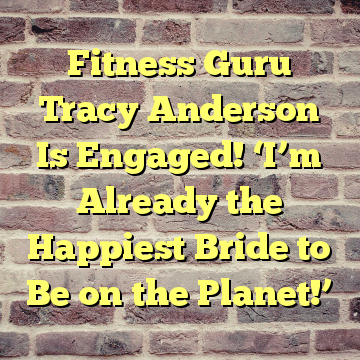 Breakout the white workout gear! Trainer Tracy Anderson is headed down the aisle.

The workout guru to the stars announced on Monday that she’s engaged to her boyfriend Nick Riley, a Scottish banker.

“Going into the week and the rest of my life with my true loves kiss!” Anderson, 42, wrote on Instagram. “It’s only been three days and I’m already the happiest bride to be on the planet!”

Riley popped the question on Friday night, Anderson’s rep confirms to PEOPLE, while the couple is in Aspen for her annual Vitality Week summit.

“PS it was extra special to be able to share my engagement excitement with the #tamily during the Aspen Vitality week. @nriley00 love you….. SO MUCH!” Anderson added on Instagram.

Anderson, who regularly works with Gwyneth Paltrow, Lena Dunham and more, was previously married twice, and has a 14-year-old son, Sam, from her first marriage, and a 4-year-old daughter, Penelope, from her second.

“Tracy, Nick, and Tracy’s two children are thrilled, and enjoying this special time together,” her rep told PEOPLE.