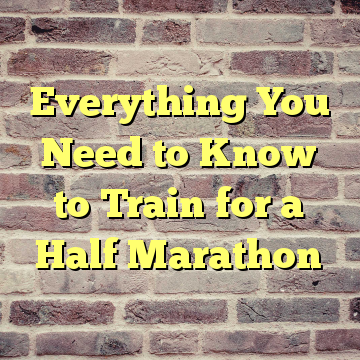 If you happened to find yourself at one of the 2,800 half marathons in the United States in 2016, you might have noticed something: a heck of a lot of ladies donning race bibs. In fact, according to a national survey by Running USA, women account for 60 percent of the nearly 2 million people racing 13.1 miles every year. And it’s not just crazy twenty-somethings lacing up their sneakers so they can Instagram their #racebling. The average age of female half-marathon finishers in 2016 was 36.6 years old—a number that’s only increased over the past two years. Think all these women were speed demons? Nope.

The average finisher time was two hours and 23 minutes (which translates to about 10 minutes and 55 seconds per mile). The point of loading you up with all these facts? To prove just how accessible this distance is for women of all ages and fitness abilities. “The half marathon is a great, manageable distance for anyone,” says Roberto Mandje, a former Olympic distance runner and the chief coach at New York Road Runners in New York City. It’s a challenge, but an attainable one: “Yes, it requires a committed approach to training—but that commitment won’t take over your life.” And once you cross that finish line for the first time, you’ll be hooked on that “runner’s high.” Ready, set, run!

How it works: If you’ve never run a half, this program will help you gradually lengthen your distance over 10 weeks. Don’t stress out over how fast or slow you are in the beginning, Mandje recommends. “Just run comfortably for your first few long runs,” he says. “You can always adjust your goal half-marathon pace as your fitness and familiarity with the training increases each week.” To figure out your goal half-marathon pace, think about what time you’d like to finish the race in, then divide that by 13 miles. But be realistic—if a 10-minute mile is hard for you in shorter training runs, you might not be able to maintain that speed for the entire race.

How it works: Already raced 13.1 miles and want to do it faster this time? Increasing your miles more significantly over the course of 10 weeks helps you get used to running faster for longer early on in your training. “Complement your biweekly workouts and long runs with a day of cross-training, like aqua jogging, spinning, or working out on an elliptical,” says Mandje. Not only will you feel fitter and stronger in general, but that extra strength primes your body to perform better at higher speeds and for longer durations—which is what you’ll need on race day.

How to fuel for a half marathon

An often-overlooked part of training? Your eating plan. “What makes you run fast on race day is consistent training,” says Kyle Pfaffenbach, PhD, the performance nutrition consultant for the Brooks Beasts, a professional middle-distance running team, and a professor of nutrition at Eastern Oregon University. “And the nutrition you’re taking day in and day out is critical in making that training happen.” Here, a crib sheet for what and when to chow down.

90 minutes before: Low-fiber, complex carbohydrates, and protein, like oatmeal, whole-grain toast with eggs, or whole-grain pancakes with sausage

“A mixed meal that’s high in complex carbs digests slowly, giving you a nice rise in blood glucose and insulin,” says Pfaffenbach. “Those 90 minutes give the insulin, which promotes the distribution and storage of energy, time to deliver energy sources into your liver and muscles, where you’re going to utilize them when you start running.”

Right before: Simple sugars like gels or energy chews

“As the race gets closer, nerves ramp up our physiology and it can help to consume easy to digest simple sugars,” says Pfaffenbach. “Simple sugars are the most easily digestible source of energy. Plus, as your insulin levels come back down from that first meal, a hit of simple sugars tells your body you’re not in a post-meal state, but that there’s energy coming in and you’re ready to exercise.”

During: Water and simple sugars

“If you’re just running at a little above conversation pace where you can carry on a conversation without feeling breathless, fueling is less of an issue. But if you’re trying to run every mile as fast as you can, you’re going to have to refuel over the course of 13 miles, because our bodies can only store 45 minutes to an hour of carbohydrates,” says Pfaffenbach. “I recommend 1-2 Clif Bloks or Honey Stinger Organic Energy Chews every 15 to 20 minutes. They’re easy to carry, easy to pop in your mouth, and won’t make breathing difficult. As for water, there’s no prescribed amount to drink, but it’s important to listen to your body’s thirst cues to avoid dehydration.”

“Taking in a whey or plant protein powder mixed with a little bit of carbohydrates—like fruit or chocolate almond milk—after endurance exercise is really important,” says Pfaffenbach. “It’s highly absorbable, has all 20 amino acids in ample amounts, and helps to stimulate protein synthesis and other recovery processes.”