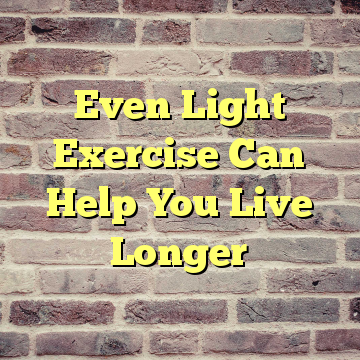 A new study shows that small bouts of light physical activity are enough to increase lifespan in older men.

Government guidelines recommended that adults get at least 2 hours and 30 minutes of moderate-intensity exercise every week. However, only about half of American adults actually meet those recommendations, and for older adults, they may seem hard to achieve. But a new report published in the British Journal of Sports Medicine suggests that there’s a way to tweak guidelines to make them more feasible for older people, while still maintaining health.

In the report, researchers looked at about 1,180 men — average age, 78 — who agreed to wear devices that measured their movements for seven days. They were followed for about five years. The researchers found that the overall volume of exercise, not necessarily how long or how hard someone exercised in a session, mattered most for longevity.

The men in the study didn’t even need to exercise for long periods of time to experience positive results. Sporadic bouts of exercise throughout the day, even if each bout was under 10 minutes, had similar benefits to lifespan as exercising more than 10 minutes at a time. This method seemed to fit into men’s lives, too; 66% of the men in the study were able to meet their weekly recommended exercise if they did it in shorter bursts.

MORE: The Surprising Secrets to Living Longer — And Better

Every 30 minutes of light intensity activity per day — like going on a walk or gardening — was linked to a 17% lower risk of early death in the study. Moderate-to-vigorous physical activity had an even stronger link to a longer life: doing it was associated with a 33% reduction in death risk for every 30 minutes of exercise. However, the fact that light exercise still appeared to have a notable longevity benefit is important, the study authors write.

If more research is able to confirm the findings, it could suggest that getting just a few minutes of exercise at a time — even if it’s light — can lower the risk of early death in men. The researchers conclude that their findings “could refine physical activity guidelines and make them more achievable for older adults with low activity levels: stressing the benefits of all activities, however modest, from light intensity upwards,” as well as encouraging people to do any level of physical activity throughout the day.