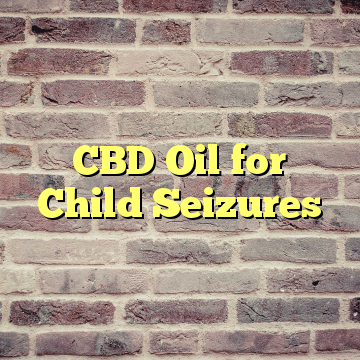 Children who suffer from seizures is a sad, but an unfortunate reality for many. There are tons of treatments for these seizures to try and help them, but not every child responds well, leaving many parents turning to other alternatives. Since CBD oil has been on the rise lately and has been known to treat a wide variety of problems, primarily pain, it is now thought that it may be able to help with children’s seizures. Though it is a controversial method, CBD is used often as a non-invasive way to manage seizures in children who have treatment-resistant epilepsy.

There has been early evidence during lab studies, anecdotal reports, and small clinical trials that show CBD can help with controlling seizures. Though there is still no concrete conclusion, research has been showing CBD as a favorable way to help children who do not respond well or at all to other medications. However, due to federal regulations, limited access to cannabidiol, financial and time constraints, conducting more studies have been a challenge to perform to make a solid case. Even with the minimal study results, the benefits of CBD products seem quite viable with groups of people with epilepsy who cannot be treated with other traditional therapies.

Though there are quite a few notable and respected studies, one that has shown the most promising data is the studies in the U.S. of Epidiolex. Epidiolex is a purified (less than 98 percent oil-based) CBD extract from the cannabis plant. It was developed by Greenwich Biosciences, the United States-based company of GW Pharmaceuticals.

Studies for this have been ongoing for years, and the data has helped provide evidence which lead to the FDA approval for the product in 2018. During controlled clinical trials, researchers used different CBD doses to various groups, along with a placebo. Every person was taking seizure medications as well. They found that people who took Epidiolex had fewer seizures than those who did not, and the rate of stopping medicine due to side effects was low.

The most common side effects included tiredness, decreased appetite, liver function changes, and asthenia. Drop seizures were also drastically reduced in children and adults with LGS with CBD rather than traditional seizure medication. Another notable finding was that people with Dravet syndrome, CBD resulted in a significant decrease in convulsive-seizures than people who were given the placebo oil.

CBD has tons of preliminary evidence that shows taking it provides benefits for children suffering from seizures. For parents looking for a way to help their child’s seizures and get it under control, CBD can be a great thing to try out if your child is part of the 30 percent of kids who do not respond to conventional treatments. However, having a professional opinion is ideal before taking any controversial steps. Before embarking on any medication alternatives, always consult your child’s doctor first to make sure it is the best decision for them.