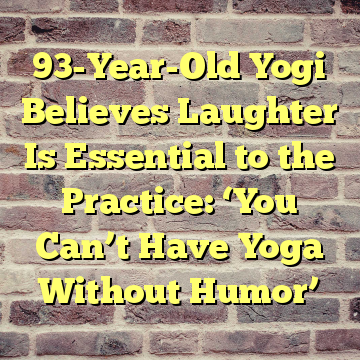 Ronnie Arond is 93, but she still teaches yoga every week in the basement of her Queens, New York home.

“It’s not a basement; it’s a sanctum sanctorum,” Arond told The New York Times about her unconventional class venue.

Arond first became interested in yoga after her husband encouraged her to take a class back in 1973.

“[I was] a nurse,” Arond, who is a WWII veteran, told 42 Yogis.“I was very physically active, but my husband really encouraged me to try yoga. And I’m thankful for his pushing. I’ve never had such a special movement in my life. It was indescribable what I felt. It was on such a level that was so deep and profound. It was life-changing.”

RELATED: Easy Fixes to Yoga Poses to Protect Your Knees, Neck, and Wrists

Arond started teaching yoga herself — both at her home and her local YMCA — and now has a large following who regularly come for her one-of-a-kind classes infused with her signature sense of humor.

“If I don’t tell a joke, call an ambulance because something’s wrong,” she told the Times. “You can’t have yoga without humor!”

Her basement classes — which cost $10 to attend — are followed by tea and dessert in her dining room.

“The yoga,” she told the newspaper, “is just an excuse for the refreshments afterward.”