This article originally appeared on DailyBurn.com.

This guest post comes from Daily Burn 365 trainer, running coach and three-time marathoner Cheri Paige Fogleman, NASM CPT (pre- and post-natal certified). The opinions expressed below are her own, and should not replace medical advice. After giving birth, it’s recommended to get medical clearance before beginning any exercise/training program.

In so many ways training for a marathon is like being pregnant. Your sleep suffers, and yet all you want is more time in bed. Your thirst is off the charts, despite drinking water non-stop. You try to eat more (because you need more calories), but your belly just can’t handle it. You’d really like a glass of wine, but you know you shouldn’t.

Your every movement is also an attempt to protect your body from injury. You prepare for months for something that scares the crap out of you, and while you just want it to be over with already, you are also still so terrified (so really, let’s not rush things). Your body is totally uncomfortable and achy and you hurt in weird places, but you know that it’ll all be worth it, and you’ll be filled with joy once the big day comes.

So, why once you’ve had a baby would you want to run a marathon?

Well, on Sunday, November 5, there I was — jammed into the corral at the start of the 2017 TCS New York City Marathon. Would my race be perfect? No. Would it hurt like heck at times? Probably. But, like most big and scary life events, I had a sneaking suspicion it would all be worth it in the end. And seeing my little girl at mile 25 reassured me of that.

Here are a few things I learned along my post-baby journey to 26.2, which might help other new moms, too.

RELATED: 17 Tips from Real Moms on Finding Time for Exercise 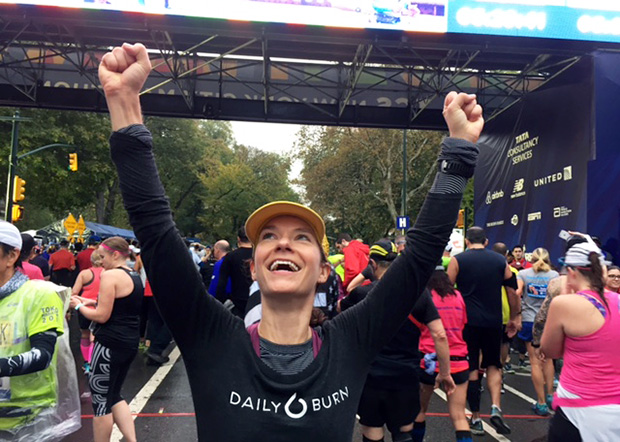 1. Take advantage of your superhuman body.

The first thing my OB said to me at my first visit: keep running throughout your pregnancy. Postpartum, you’ll be able to get back to running quicker and you’ll still be able to take advantage of all the cardiovascular changes that happen to a pregnant body. These changes include increased cardiac output (up to 50 percent more than pre-pregnancy), increased blood volume (also as much as 50 percent more than pre-pregnancy), and an expanded ribcage (which offers more volume of air in one breath).

Basically, during pregnancy, oxygen circulates through the body more efficiently, and with increased efficiency, the body can perform better — and with greater ease. And, because a woman’s body doesn’t just snap back after delivery, it can take a year for the postpartum body to operate “normally” again (depending on breastfeeding). But that means we can take advantage of that so-called superhuman body for a while. My OB’s advice: Plan to qualify for Boston just shy of a year, postpartum. It’s nice when you can get a running coach and an OB all in one, yes?

RELATED: The 30 Best Marathons in the Entire World

Possibly because of dehydration, maybe because of physical stress, I found that my breast milk production tapered dramatically once my training picked up. If you are exclusively breast feeding and are less than six months postpartum, a few things can help. Oatmeal, for instance, is high in iron, which is believed to promote milk production. Some experts also suggest performing a series of power pumping sessions (as in milk pumping, not pumping iron). This method encourages over-production going into your training so you’ll have extra in the freezer in case you’re coming up short and the little one is hungry. For me, consuming more gels and drinking more electrolytes (e.g. Gatorade and coconut water) while training also helped keep my production from dwindling.

3. Give your feet special attention.

Because it can take about a year for hormone levels to return to normal after giving birth, be cautious of over-stretching and putting excess strain on your feet. The hormone relaxin is present in the body during pregnancy to allow tendons and ligaments to loosen and the skeleton to make space for the baby. If your feet grew during pregnancy, that same hormone can now cause your feet to shift even more. Avoid minimal shoes (unless you’ve been wearing them all along). And don’t skimp on calcium, which has been shown to help protect not just the bones in your feet, but your entire skeleton. Plus, it fuels your body’s energy production — so make sure you fill up on sources like milk, yogurt, spinach and kale. A postpartum body (and a breastfeeding body) is often calcium-deficient due to “mining” calcium from the mother’s bones to provide for the growing baby.

RELATED: 9 Things I Wish I Knew Before I Started Running

4. Heed the advice about changing up how you hold the little one.

I was told to switch up which hip I hold my daughter on by more than one person. And I’m a trainer, so I should know better, right? (I have even given that same advice to clients for years!) And yet, when life happens, I have been 100 percent guilty of slinging her on my left hip while scurrying around the kitchen slinging eggs and coffee and oatmeal.

It wasn’t until my 15-mile training run that my back started to feel a little twinge…and then my hip and then my hamstring and then my calf. A few weeks later, after an 18-mile long run, I couldn’t walk. A trip to my PT revealed that (due to holding my daughter only on my left hip) my right lower back and the muscles that run up the right side of my spine had all called it quits. That lead to a chain reaction of pain and suffering down my left hip and leg. Which brings me to…

5. Whatever amount of core training you’d normally do, multiply that by four.

During pregnancy, abs have a tendency to stretch or even separate (aka diastasis recti), and if you had a caesarian, the trauma can be worse. This has an effect on not just your ab strength, but also your back stability and the integrity of your entire kinetic chain. As a pre- and post-natal certified trainer, I recommend planks, side planks, bird-dogs, bridges and supermans. And if you can, make an appointment with an MAT (Muscle Activation Technique) therapist. A MAT therapist can determine where muscle weakness might be causing problems. Next, he or she will work to bring that strength back by palpating muscles, then prescribing specific isometric exercises to continue on your own. It’s been a game-changer for me.

In my before-child days, I never realized I was taking for granted the freedom to run at any time and for any distance. But now I know. The acrobatics of juggling childcare for training has meant driving 45 minutes to my brother’s house to drop off my daughter, squeezing my long run into two hours, and then rushing back home for her nap time. It’s meant waking up in the pre-sunrise hours to run and get home before she wakes. I joined a gym specifically because it has childcare. And, I went out and bought a jogging stroller. While there is a certain amount of peace and quiet that I’ve thoroughly enjoyed while running, the extreme inconvenience of every single run is unavoidable. Whereas my biggest decisions were once which leggings to wear, or which route to take, now it’s: where my daughter will be, if she’ll need food or milk, and when she’ll take her next nap.

Because my better half, my brother and sister-in-law, my friends, my wallet and even my daughter have all made sacrifices for the sake of my training, my performance on November 5 was more important than ever. It took a village to get me to the starting line. For their sake, I could not let the village’s efforts be in vain.

RELATED: How to Run (And Watch!) the NYC Marathon Like a Pro 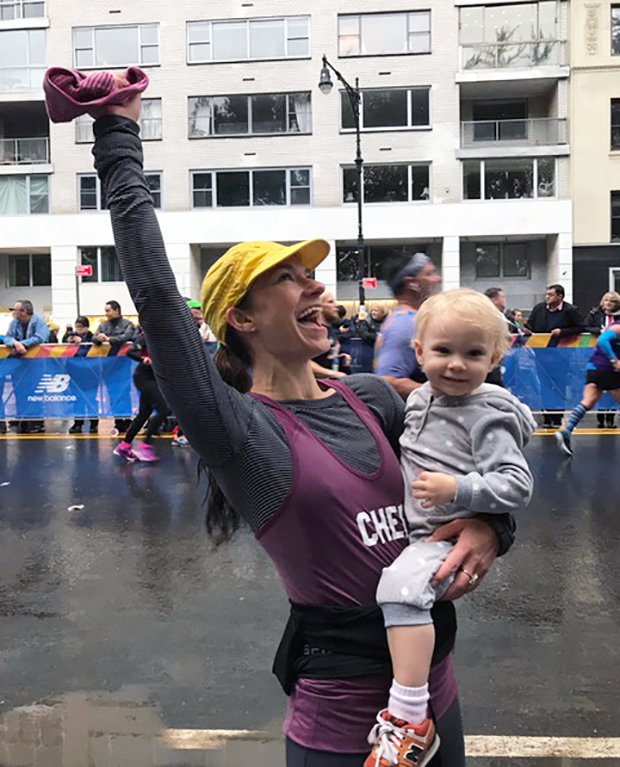 There’s no way around it: Hitting the wall sucks. But the sudden fatigue caused by depletion of glycogen stores is something all endurance athletes have to learn to push through. As a running coach, one of the ways that I familiarize clients with that “wall” feeling is through repeat speedwork. (Think: repeat 400s, 800s and miles.) It’s brutal, and it perfectly recreates that hopelessness and defeat as your legs feel like they are going to fall off or melt and you crumble into a pathetic heap on the ground.

The “good” news? I now know that the first three months of my child’s life was just hitting the metaphorical and literal wall over and over and over again. I went weeks on mere hours of sleep and then managed to not wake her as I cradled her, stood up from seated on the floor, tripped over the cat (and a pacifier), and finally lowered her into the bassinet. That is pushing through the wall! I now know that motherhood makes you an expert on perseverance. All of my training on the road and the treadmill prepared me for the marathon, but it was my training as a mom that prepared me to win it.

8. Your little one will help you recover faster.

Don’t worry for a second about how you will run 26.2 miles and then be able to squat down to tie your baby’s shoes. You already do daily functional training in the form of squatting, bending, twisting and lifting with your little one. So, as you add on miles, you will naturally continue your feats of strength and acrobatics. In fact, in my before-child days — when I’d allow myself to lounge around after a long run with my feet up — recovery actually took a bit longer. But, because blood flow (from movement) encourages recovery, and a toddler doesn’t allow days off from chases through the apartment, my muscles were surprisingly chipper the day after long runs. They even felt pretty great the day after the marathon!

One of the overwhelming takeaways of running the NYC Marathon is how spectacularly the spectators cheered. Their emotional shouts of encouragement contained something more than inspiration. I felt a very strong sense of appreciation that I was achieving this marathon goal for them — on their behalf. While that’s a humbling duty I’m honored to carry out, I’ve begun to think more about how my every action impacts my child. It’s cliché, but true: Having a daughter has made me want to be a better version of myself. And more than ever, I’m aware of how I can lead by example.

I want my little girl to see that setting your sights on a goal and working to achieve it are key to excelling in life. And, for me, running 26.2 miles through the five boroughs of New York City was achieving a goal on my daughter’s behalf. It was my way of showing her that she has the necessary stuff in her genes to power through the seemingly impossible. That she can achieve things beyond her wildest dreams.